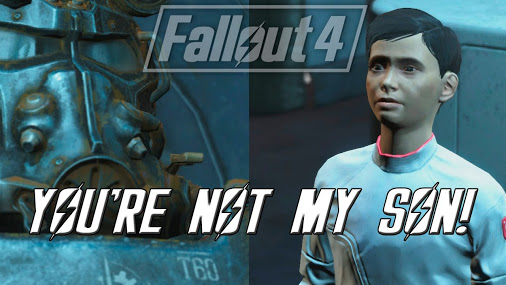 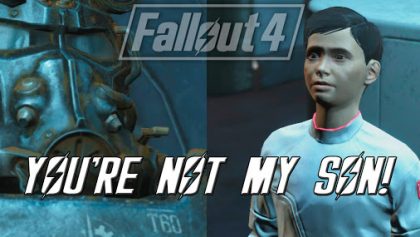 I am the kind of person that will play a game for ten hours to see if the child of two characters looks like his parents. In Fallout 4 a big part of the plot is rescuing your kidnapped son Sean. The whole introductory event is based on the happy family with their baby being caught up in a nuclear holocaust. The character creator is incredibly flexible. There are multiple presets of both sexes that cover all sorts of ethnic types and you can fly free and create whatever you want if you want to invest the time. It would be nice if that effort paid off when you finally meet your progeny.

I’m happily blasting ghouls and deathclaws with my Asian Brotherhood of Steel fanatic and I’m just about to break into the institute and … You should probably stop reading now if you’re worried about spoilers … meet my long lost son when I hit a fatal corruption in the files. I lose the whole character before I find out if Sean looks like dear old Mom with that Han Chinese face. (She was adopted by a GI and is a SUPER AMERICAN COMMIE HATER even though she was born Red)

This means I have the question in my head when I’m rerolling the character so I slide the scale all the way to eggplant dark. My guy would make an equatorial African look pasty pale. There’s not going to be any question the Mailman was fooling around with Nora if Sean ends up looking like he did on my first run through. Hah I’ve got you now Bethesda! 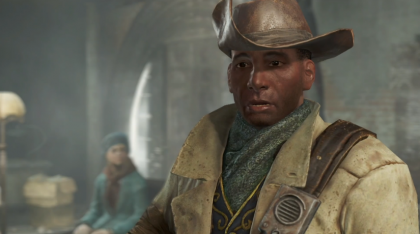 Maybe it wasn’t the Mailman… How old is Preston and why wasn’t he surprised my guy lived in Sanctuary before the war?

I know from the ER episode Middle of Nowhere that babies can come in all colors. This saves Nora from divorce proceedings when I examine baby Sean and discover him to be just like every other baby Sean I’ve met. Ten hours later I step into the transporter to find out if Dr. Benton was right or the game designers just toss the same Sean at you every time.

Sean had a café au lait complexion and his dad’s nose. He looked completely different from my first playthrough. Sean’s appearance changes depending on what you make your character look like. At this point I wonder what those people who made their character look like Beavis or Butthead are confronted with when they meet their son.  NO! Ten hours on one experiment is enough. 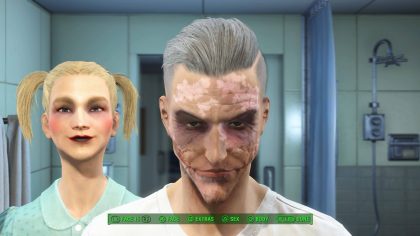 This explains a lot about the Institute

All the photos online seem to show the same Sean. This is because most people don’t actually monkey with the presets much. Only a very small percentage is OCD enough to then also customize their spouse. Sean is an amalgamation of his mother and father. I’ve since read that Sean will always have the nose of his father and the eyebrows of his mother but this is internet speculation. How it’s done really doesn’t actually matter. The attention to detail and immersion in this game is what’s amazing.

Despite the companions being amazing friendly to the LGBTQIA+ gamer some people have complained that the opening event is Heteronormative. Don’t worry LGBTQIA+ blogger Bethesda always relies on the modding community. I mean they came up with a Baby Launcher within days of the release how hard could a same sex marriage be? Turns out all you need is a tweak of the save files and you can start Armageddon with the relationship of your dreams.

As a side note homophobia doesn’t seem to be a problem in the alternative world of Fallout. You might not have noticed it but as you were dashing to Vault 111 there was a lesbian couple embracing. The one bright point of the Brotherhood of Steel came when I accidentally outed Danse trying to get his companion perk. Sure they kicked him out of the Brotherhood but it wasn’t for all the gay sexing. What a swell bunch.

Filed under: Does sean look like his parents, Fallout 4, Paladin Danse gay