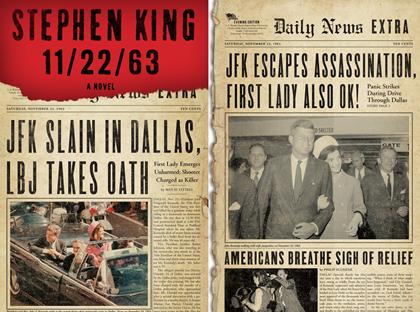 “Where were you when JFK was shot?” It’s a question that has been asked to many a Baby Boomer in this country. I’ve asked my mother many times and it always seems to conjure up an emotional response. She, like many others, was sitting in her classroom when they received the news. JFK’s assassination changed the world in a way the country had never seen before. In 11/22/63, King explores the possibility of living in a world in which JFK lived. And it’s all up to one guy to try and pull off a grand scheme to stop the assassination.

What’s the novel about?

King has been known to say that this was one of the most difficult novels he’s ever written. This is true mainly because of the importance on content being true to historical account. King researched endlessly in an effort to ensure the events were recorded accurately. In the novel, an English teacher takes it upon himself to stop Lee Harvey Oswald by using teleportation to go back in time. This portal is in the back of a burger joint known for their incredibly cheap burgers. The owner uses the portal to go back in time and purchase meat for much cheaper than the current market rate.

This novel is one for the history lovers out there who appreciate a well-written piece on one of the most notorious moments in our country’s history. The story is endearing as Epping attempts to save JFK, and the future of our world. Instead, he causes a ripple in time that bears much harsher consequences than JFK’s murder. King still manages to deliver a supernatural element as well, satisfying fans who were looking for more. 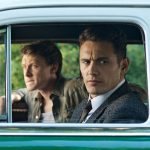 On the hunt – a manhunt.

In 2016, the novel was adapted into a limited time mini-series by Hulu, starring James Franco as the enthusiastic English teacher. The series received rave reviews, even earning a certified fresh rating on Rotten Tomatoes with an 80% score. The mini-series was dubbed a science fiction thriller with an eight episode run. If you haven’t checked out the book or watched the series, I highly suggest seizing the opportunity now. The novel is pretty lengthy, as is most of King’s work in general, making it a perfect read next to a cozy fire.

Comment below if you have read 11/22/63 or watched the series. What were your favorite parts of the book/series? Do you think Hulu did a good job adapting this novel into a mini-series? What did you think of James Franco’s performance as Jake Epping? Don’t forget to subscribe to superficialgallery.com for all of your news needs and follow us on all social media for the latest updates from the SG team!