31 Days With the King – Misery

It’s day 3 of 31 Days with the King and what better way to end it than with a little doozy called Misery. Misery is by far one of King’s spookiest and most thrilling novel solely because the main character is brutally beaten by his number one fan. I mean, that’s the price you pay for writing an amazing series of books and deciding in the last inning to kill the main character. Especially when the series’ biggest fan has you captive in her house of horrors. The novel was released in 1987 and later made into a motion picture by the same name starring none other than Kathy Bates as Annie and James Caan as Paul. Bates is chilling as she breathes life into the psychotic Annie and Caan seems best equipped to play the helpless victim of Paul Sheldon.

The plot of the novel goes a little something like this – Paul Sheldon has written a bestselling series surrounding the life of one Misery Chastain whose romantic endeavors make the series highly favorable – particularly amongst lonely, single, and desperate ladies who devote their lives to the books. Sheldon, tired of writing about the romantic bouts of Misery, decides to turn his eyes to crime and writes a novel named Fast Cars while staying at the same hotel in the same room where all of his other masterpieces have come to life. Instead of flying home to NYC, Sheldon decides in a drunken stupor to road trip out to California, man. He’s ready for some sunshine after being cooped up in that miserable (see what I did there?) snowy town for months. But before he can get the baby oil on his skin, he drives over a cliff and lands upside down in a snowbank at the bottom of a mountain. 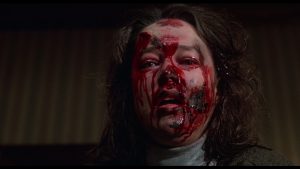 It’s his lucky day when Annie Wilkes, former nurse, comes across the wreckage and discovers it’s her favorite author in quite a situation. She takes him to her house to help care for the two smashed legs he got from this quick decision. During his stay, Annie realizes Paul intends on writing Misery out of the print game and becomes enraged at the thought. Like they say, Misery loves company! The rest of the story is quite simply what you imagine. Mallets, hammers, and no painkiller to help, Annie puts Paul in misery in a very ironic turn of events.

Have you read Misery and if you have, what was your favorite part of the book? Didn’t catch it in print but saw it on the big screen? Tell us how you felt Bates and Caan brought this disturbing tale to life. Don’t forget to subscribe to Superficial Gallery where we’re putting out the good stuff daily.