A Hero to the Unemployed 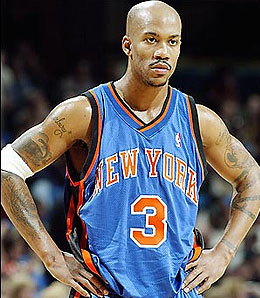 (Stephon) Marbury was captured by TMZ on film smoking a joint and then confirmed on film that he was in fact smoking marijuana. But he’s not currently on an NBA team, so it’s cool.

“I’m not under contract … I smoke weed occasionally. … I’m not driving … I’m following the rules,” the former Knicks guard says on the video below.

Damn right he does. Dude ain’t unemployed, he don’t got no damn rules to follow, man.

So, take your stuck-up non-wanting to see Stephon blaze boring self out to pasture because Stephon is doing what he damn well pleases.