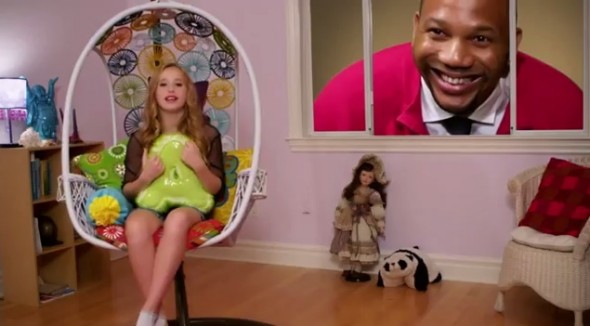 If you were alive and on the internet last year, I can only assume you were treated to YouTube “sensation” Rebecca Black and her unquestionably annoying yet inexplicably ubiquitous paean to the fifth day of the week, Friday.  The brainchild of Patrice Wilson, that song and a shudderingly large number of imitators are created by Ark Music Factory, a production company catering to the wealthy parents of kids who want to be famous on the internet but aren’t quite ready to go full Kardashian.

While Friday had all the auto-tuning and painful rhymes on bizarrely banal themes that have become hallmarks of Ark Music Factory releases (see It’s Thanksgiving and Chinese Food), someone must have decided their catalog just wasn’t child molest-y enough when dreaming up the video for their latest release, ABCDEFG.  From the start, with Patrice Wilson as a giant genie in a Mr. Rogers cardigan, there are stops at “I wish I knew how a dictionary worked,” “I should totally get in the van of this creepy old guy who is peeping in my window,” and “Yes, I will drink this mysterious potion you just poured in my drink,” before ending up at human cannibalism in the form of Chinese takeout. All of which pretty much makes this video a complete tour de force in WTF-ery.  Bravo, Ark Music Factory.  Bravo.