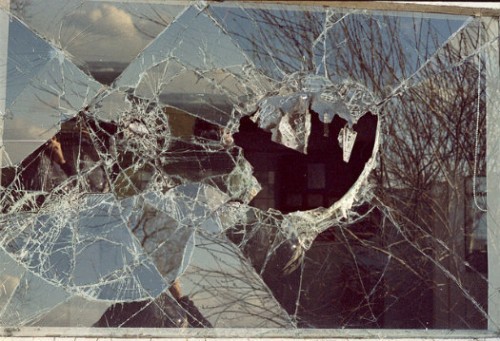 I had a pretty productive weekend.  On Saturday, I was able to get quite a lot of yard work done.  Later that night I had the opportunity to see a relative that I had not seen in quite a while.  It was great to catch up.  Then, on Sunday, I took the family to Wet and Wild.  There were a couple times that I wanted to punch a few parents in the throat, but other than that, it was a good time.

When we got home, I discovered that a brick had been thrown through a window of our house.  Upon closer inspection, there was a message written on one side of the brick.  It said, “You need to write a post.  Now. -Acadia”  Wonderful.  After a nice weekend with the family,  things come crashing back to reality.  Someone really needs to teach that man how to text message.  It is easy to ignore text messages.  This window thing, not so much.

Needless to say, the window incident got me pretty bummed out.  The boss man was cracking the whip and all I wanted to do was sit down and have a few beers.  In order to avoid him wrecking anything else besides my window and my disposition, I had a few discussions on depression forums to get myself straightened out, and now I’m off and writing.  He didn’t say what I had to write about, so I am just sitting here typing with no real direction at all.  I have to say, though,  it is actually working  out pretty well.  I am getting my post done and outing Acadia as the cruel, heartless boss that he is at the same time.  Everything seems to be coming together nicely.  Now, if you will excuse me, I have a window to fix.