Acadia Gets No Respect

A few weeks back, Acadia decided that he wanted to be all artsy fartsy and get his picture taken walking on beach while contemplating the deeper mysteries of life.  He thought this approach would be a better way to get women than kidnapping them and keeping them blindfolded in the bathtub asking them out on a date.   So, he made all the gallery writers draw straws to see who would accompany him to the beach to take said pictures.  I was lucky(?) enough to get the privilege.

We get to the beach, I pull out the camera and prepare to start shooting.  Acadia strips down to his bathing suit, oils himself up, and begins strutting down the beach.  I’m about to snap a shot when all of a sudden a couple dozen people race into the shot and ruin the picture.  They wouldn’t stop it the whole time we were there.  I eventually ran out of film.

So, this is the best shot of the bunch, Acadia.  Sorry it’s not exactly what you wanted, but you know, I kind of think those spoilers helped a little. 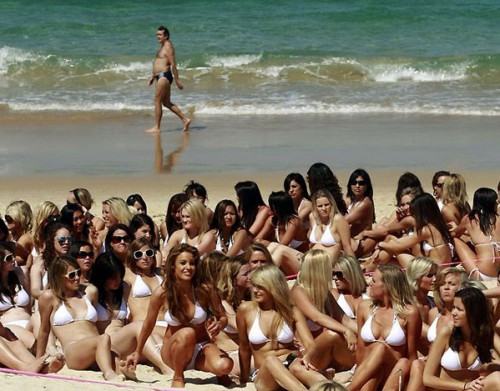 I hate it when people spoil pictures, don't you?