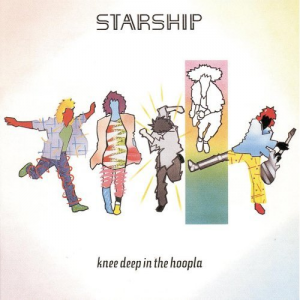 My first ad nauseam music experience came with these two albums.  I was 6 or 7 years old at the time.  I lived a good ways away from my school, and as such the bus rides to and from were longer than average.  Fortunately, our bus was equipped with a cassette player.   All we had to do was present Mr. Buck with a tape and ask him to play it, and more often than not, he would.  Ah, good ‘ol Mr. Buck.  I remember him vividly with his country clothes, especially the huge belt with “BUCK” carved into it in the back.  He looked very much like Unknown Hinson.  In fact, when I first saw Unknown Hinson, I thought it WAS Mr. Buck.

All he’s missing is the belt.

Anyway, I would present Mr. Buck with either the Starship or Europe tape, and we’d be off.  You know, it’s weird.  For as much as I’ve heard that Starship album, I don’t recall ever seeing that album cover.  I probably lost the tape case pretty soon after getting it, because I do remember owning the tape.  It was one of those cream colored ones, before they started doing the clear ones.  Looking at the track list for Knee Deep in the Hoopla, I don’t really recall what many of the songs sound like, probably because we usually didn’t get too far into the tape before we’d ask Mr. Buck to rewind it to the beginning so we could hear “We Built This City” for the millionth time.  Perhaps the most extreme example of us doing that would be when we made poor Mr. Buck play Eric Carmen’s “Make Me Lose Control” over and over and over and over and over.  Same thing goes for Europe and “The Final Countdown”, but the Europe tape got a lot of play at home, too, so I do remember what a lot of that album sounded like.  In both cases, I must say that I have no desire to go back and reacquaint myself with the music on either of these albums.

I guess I should also mention that there was another album in the school bus rotation.  It wasn’t mine, but it definitely got equal time with Europe and Starship.  It was New Kids on the Block.  I don’t even know what the name of the album was.  It was the bane of my existence, though.  I hated it when I’d get on the bus and go to hand Mr. Buck a tape, and he’d tell me that some girl had already given him the NKOTB tape.  Ugh.  You girls and your damn New Kids on the Block and your cooties.  I can’t wait to put gum in your hair.  Grrr.

I just had to include the videos for “We Built This City” and “The Final Countdown” because holy hilarious 80’s, Batman.

Filed under: Ad Nauseam, Europe, New Kids on the Block, Starship, The Final Countdown, Unknown Hinson, We Built This City