Agent Acadia and the Nature’s Sleep Mattress Topper (A review)

This is a commercial – the Nature’s Sleep company gave me one of these things to review and it really is cool.  But I will only do commercials if they are written like I am a spy, so here goes.  I’m no sell out!  Kind of! — Acadia

The Nature’s Sleep Mattress Topper was delivered to Acadia’s penthouse when he wasn’t home.  Being a secret agent, he was often greeted with new items when he came home from a mission and today was no different.

He had just been in San Diego (mission accomplished!) and was now home and needed to get this thing on his bed.  It is impossible to exaggerate how sore one can get from secret agenting, and the west coast assignment was tough.  He had bruises all over and needed sleep.  But between him and the rest he so desperately needed was a box.

Inside the box was a very tightly packed…chunk of foam.  Could there be a Mexican dwarf hiding in there with a knife?  One time on a mission in London a Mexican dwarf was hidden in a laundry bag for three days before springing out with a knife in his teeth.  That bag was about the same size as the box.  And the item did ship within 2 business days of his order.  So maybe there could be a dwarf in there…

Acadia decided to risk it and dumped the foam mattress topper out of the box.  It had instructions.  One would not think a big foam rectangle would need instructions but then again he wouldn’t think those little silica packets that come in shoes needed to say “DO NOT 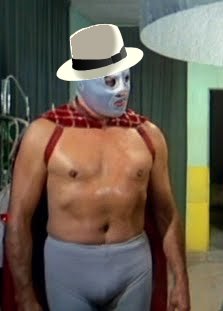 EAT” on them so whatevs.  Apparently the topper needed to be placed on the floor (in a space as big as the bed) and allowed to unfold on its own.  So he did just that.

His cat, Chairman Meow, investigated the topper as soon as it started to unfold.  His little paw prints disappearing almost instantly as if he were walking through quickly falling snow.  Watching the thing expand was sort of hypnotic, but Acadia didn’t have time to get hypnotized.  He needed to see what other expand foam things he could buy.

He checked out the Nature’s Sleep site and found that not only do they have toppers, mattresses and pillows but other stuff like pet beds and slippers.  Slippers?  The idea of those smooshy, squishy things on his feet forced him to order some.  But just before he submitted it, he remembered the discount code.  “BEARS50”. It gets him 50% off anything they sell.  He got the code on the mission before he went to San Diego, part of a really lame deal he cut with a snitch.  Now that he thought about it, he could have used the topper thing when he was in San Diego.  That mission really took something out of him.

But for the time being he was happy with the topper he had.  It had finished expanding and was now ready to put on the bed.  It was not a one person job but it got done eventually.  Acadia wondered if his 800 thread count sheets would be able to go over the three inch thick topper and the mattress (they did) and if he would think the thing was comfortable (he did). Agent Acadia got the best sleep he had gotten in years (the thing really was comfortable) and as he drifted off, he made a mental note to get the mattress in the morning. The last thing he thought that night was how silly he had been for thinking there was a Mexican dwarf in his penthouse intent on killing him (there wasn’t).

This time, the dwarf was Romanian, and a woman.  But that’s another story.