Episode two of AHS: Apocalypse didn’t fail to deliver as it continued unfolding what a post-apocalyptic world would look like through the eyes of the Antichrist while dipping its toes into familiar waters for fans worldwide – more Murder House tie-ins! With this came more questions, so without further adieu, let’s dive in. Burning Question 1: Who Donned the Black Suit?
Aside from Michael Langdon, fans received their second taste of Murder House Wednesday when the infamous rubber suit made its first appearance of the season. Boy did it come with a bang, in more ways than one. The suit showed up in several scenes with chaos right on its invisible coattails the entire time. Perhaps more exciting than the suit itself is the question – who was in the suit? Is it Tate Langdon, daddy dearest to our little terror, Michael, or was it someone in Outpost 3 living out some sordid fantasy? Male presence is in no short supply as we see a few new Grey faces during the episode, but who could it be? 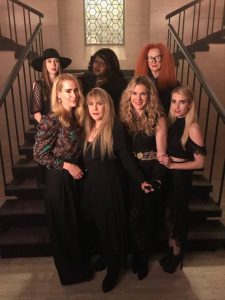 Burning Question 2: Where My Witches At?
While this episode served up more Murder House surprise hits, we were also given a few callbacks to Coven with the snakes and most importantly, Queen Stevie herself coming to us via creepy stereo with an appropriate cue to “Gold

Dust Woman”. This leaves us begging for more witches! Blessed be the Coven. 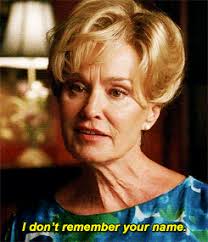 Burning Question 3: When are we getting Jessica Lange?
Since confirming her comeback and reprisal of Constance Langdon, Jessica Lange has been at the top of everyone’s guest list as we eagerly wait to welcome her back into the AHS universe. Rumblings confirm she will be back episode 6 of Apocalypse, but will that be the only screen time we will get from the old-g of AHS or is there more?