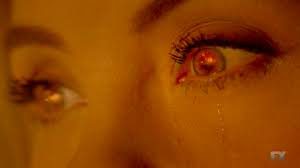 That look when you realize your only super power is detecting gluten.

American Horror Story: Apocalypse returned Wednesday and left everyone with a killer cliffhanger, literally. Murphy and Falchuk have really upped the AHS game this season with the perfect crossover recipe to ever exist. A half of Coven, half of Murder House, and a dash of Hotel and voila! You have one kick ass season full of twists and turns that leave the audience begging for more. So get your tea ready as we dive right into this week’s recap of Episode 8: Boy Wonder. 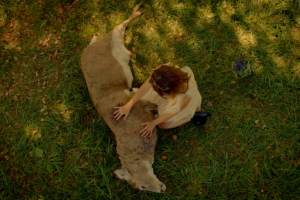 Cordelia has a terrifying vision of a post-apocalyptic and accepts the warlock’s request for Langdon to perform the Seven Wonders. Back at Miss Robichaux’s Academy, Mallory brings a deer back to life and also reverses the age of the deer. Cordelia tries to convince Myrtle that she’s dying when Coco’s father arrives at the school with a miserable Coco in tow. Apparently her super power is being able to detect gluten. Our suspicions are true – she’s useless.

Langdon’s ready for the test.

Back at the Hawthorne School, the warlock council is throwing Langdon a pep rally as he prepares to complete the Seven Wonders. During the celebration, John Henry catches a glimpse of Langdon’s BOO face – which matched the Cordelia’s vision of the future. JH is convinced there’s something sinister inside of Langdon and prepares to visit the coven to discuss this with Cordelia. He is interrupted by Behold, who tries to convince JH that he’s jealous of Langdon’s powers. After JH throws down on Behold, literally, he leaves him with some words of warning that shook Behold’s wig, even though he’s bald. JH stops for gas at a super creepy place – even for a warlock – and is tricked by the Real Miriam who slashes his ankles and sets him on fire. 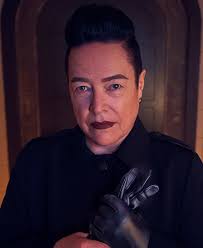 In a crazy turn of events, Devil Mama pays her son a visit, letting him know the job was done because of the help of Ariel, the Grand Chancellor. He wasn’t going to let JH ruin their chances of reigning over women for once. Michael performs the Seven Wonders with ease, when Cordelia gives him a challenge for his descensum – bring back Misty Day. After some whining from the men on the unfairness of Cordelia’s request, Langdon steps in and accepts the challenge. He makes the trip home and finds Misty in her dissecting nightmare. He kills the teacher in an unnecessarily gruesome way then has an odd chat with the students in the class before returning Misty’s ashy ass back to Earth and to the arms of Cordelia. 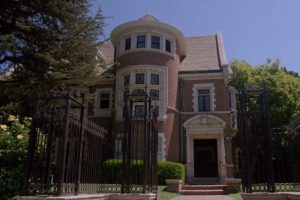 Misty tells Cordelia about freaky kid gibberish between the classmates from hell and Langdon. Admitting something was off about him, Cordelia reveals her confirmation was his success bringing back Misty. *cue Stevie Nicks serenade, swoon* Michael also confirms he’s a monster as he’s clearly unimpressed by the White Witch. Cordelia pulls Madison aside to hatch a plan sure to reveal Langdon’s true identity when they are interrupted by Behold. He too has his suspicions and wants to team up and get down to the bottom of things. Most importantly we are left with the first clue to Cordelia’s plan, purchasing the infamous Murder House.

Did you enjoy this episode of AHS: Apocalypse? Were you excited to have Misty Day resurrected and a surprise visit from Stevie Nicks? Did JH’s fiery demise piss you off? How excited are you to finally get back to Murder House in next week’s episode? Comment below and let us know what your highlights are from this episode and don’t forget to tune in every Friday night with me and Acadia as we shoot the breeze about this week’s episode. 10:15pm ET – be there if you dare!