Al Davis Knows How to Pick Them 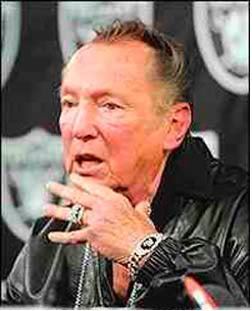 Were you worried that new Oakland Raiders head coach Tom Cable would not fit into the craziness that is the Oakland Raiders? Of course not, there is clearly no need to worry about that sort of thing.

According to reports by several media outlets, an Oakland Raiders assistant coach was treated at a Napa, Calif., hospital emergency room earlier this month for a jaw injury suffered when he was struck by another member of the coaching staff during a meeting, he told police.

According to a report by Web site FanHouse, defensive assistant Randy Hanson was hit by the Raiders’ head coach, Tom Cable.

As long as he realizes they need to hand the ball to Darren McFadden a lot, punching other coaches should not get into the way of their overall team goals.