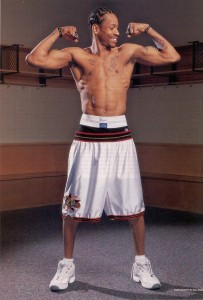 GET THESE BUST CARDS OUT OF MY FACE MAN!

I have to say, I almost ran with a story here for the Gallery last night. The story would have consisted of a Detroit News report that Iverson had been banned from the Detroit Casino’s.

Iverson, though, has been banned mostly for his boorish behavior. He is a bad loser, and he loses a lot, often throwing his chips or cards at the dealer. He has been warned about improper behavior at the tables repeatedly. He is often loud and disruptive, according to witnesses, rude to dealers, other players and the wait staff.

Yeah, and he was probably increasing the play of those around him. I mean, who would a leave a casino while Iverson is in there causing these kind of scenes? I would have to imagine that on the list of reasons to gamble more than you wanted, that watching an athlete be unruly to the staff is right up there with the free drinks. I’d watch Iverson pull this antics for hours and be OK with pushing away a couple hundred to the house.

So, I had my doubts to the veracity of the story and my journalistic integrity kicked in and said to hold posting until today, let more of this story unravel. I certainly wasn’t going to call the MGM Detroit or Greektown Casino myself, , but I certainly was going to sit back and let someone else do the legwork on uncovering the bullshit nature of this story.

And the Detroit Free Press did just that. Spokespeople for the two casinos said that Iverson was not banned and that they didn’t even know whether Iverson was warned about his behavior. Casino spokesperson code for: come on down to Greektown and once Iverson has about 5 cocktails in him you’ll get a show that will match cirque du Soleil.