America is so fuckin’ bizarre, man 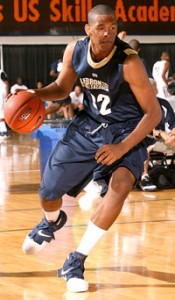 So, what's next, some middle school kid commits to a college before a HS...oh, wait...

This Yahoo article is about Jeremy Tyler and his decision to skip his senior season…of HIGH SCHOOL…to play ball in Europe.

This isn’t some sign of the sporting apocalypse or a teenager with an overvalued sense of worth. It’s a daring, trailblazing yet well-thought-out move that challenges the bizarre way America develops amateur basketball players.

Yeah, you know, that system that has kids get their high school diploma and at least an opportunity at a free college education. Such a crazy fuckin’ system like that will never work, man.

There’s a difference between what Stephen Curry did in skipping his senior year of college to go pro and what Tyler is doing. See, Tyler has to play two years of ball in Europe because he’s skipping his education. Curry is only leaving because he knows that he’s going to be a high draft pick. This Tyler kid has no fucking clue what his NBA stock is going to be in two years.

For those who don’t pay attention…here’s what happened. Tons of kids went from high school to the NBA. A lot of these kids found success, Garnett, Kobe Bryant.

However, do you know who Korleone Young is? Jonathan Bender? Leon Smith? Those three all went from high school to the NBA and flopped. In an effort to avoid those flops and do better by the kids the NBA drafts, they instituted a rule that led to players like Greg Oden, OJ Mayo and Derrick Rose to take a year in college before leaving for the NBA. At first, I was skeptical. If they are ready for the NBA, why not let them develop in the NBA. But, it’s worked as a filter. Players that thought they were ready to declare for the NBA get a reality check in their 1 year of college and can now get their education. Those that would have been fine heading straight to the pros only take a one year speed bump.

It’s certainly not a bizarre system, even if it has its flaws. I’ve never seen Jeremy Tyler play, sure, we might see him as the #1 pick in 2 years. But, we might also never hear from this dude again.