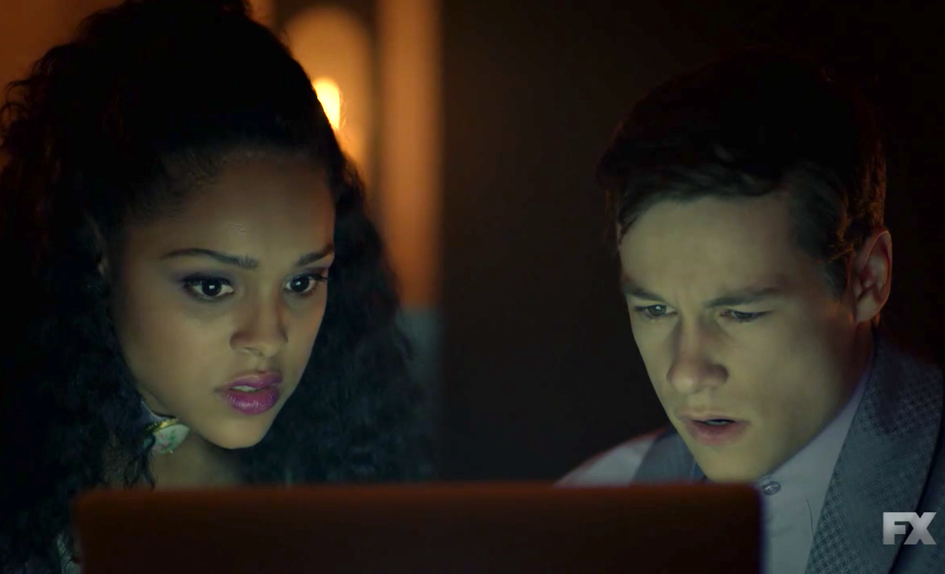 In the first ever installment of Under the Microscope with Mells, let’s take a closer look at those emails our favorite little teenage mutants were snooping through in Langdon’s room in Outpost #3 during episode two of American Horror Story: Apocalypse.

After deciding it was a good idea to break into Langdon’s room, Timothy and Emily are blown away by this mystical box that was once known as known as a computer mysteriously glowing on Langdon’s bed. Both are confused as they are living in a post-apocalyptic world supposedly void of any electricity or technological convenience. They rush to open the top and peek inside a treasure chest full of precious booty. Here’s a breakdown of what we found:

The year is 2021 and the month is naturally October. What other month of the year would you expect the Antichrist to show up? While this is a closeup of the timestamp for this correspondence, it confirms a few things for us going into this season. First, infrastructure still exists in the world we once knew, to some extent. Langdon/The 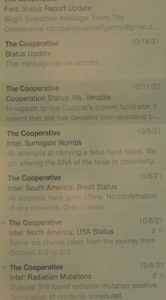 Cooperative communicate via some type of Wi-Fi or satellite signal as pointed out by our more intellectual mutant, Emily. Secondly, Langdon/The Cooperative have been to the other three confirmed outposts in the US and have evidence to confirm they have been unsuccessful in maintaining an open sign on the door.

Surrogacy has yet to be successful at the Sanctuary, backing up Langdon’s future conversation with Gallant in regards to harvesting genetic material. Looks like the next step in the Cooperative’s major plan is to manipulate the DNA of the fetus to potentially grow without the necessity of a womb. Could this also generate some kind of superhuman force that can battle, oh I don’t know, a coven maybe, and restore the world’s natural balance of light and dark?

There’s also intel on Radiation Mutations from another outpost (319, what’s up with the numbering?) and the confirmation that the residents will be terminated. Bummer. I don’t think anyone will be back after that .. do you get it? Terminated? I’ll be back … classic! Langdon/The Cooperative haven’t received any information on the Brazil location as all outposts have gone offline. Potential overrun. All outposts … is this ambiguous here? I thought there were only ten in the whole world. Now I’m confused.

Venable and Gallant’s fate. Both are marked red and have front row tickets to an execution hosted by our very own Michael Langdon. Presumably that is. We read that there are two promising candidates, but there are doubts about them … is this in reference to our teenage mutant lovers or two other occupants of Outpost #3? This also poses the question, is there a mole in the hole? Although we don’t know Langdon’s arrival date, we know All Hallow’s Eve is right around the corner, but these messages are dated from earlier in the month. Even without an arrival date, we know that Langdon hasn’t been visiting Outpost #3 for two weeks … right?

Comment below and tell us your thoughts on the emails from the episode. What do you think the Cooperative knows and how did they find out? Do you think there’s a mole in Outpost #3 and if so – who do you think it is?