Another Perspective on the Polar Bear Crisis

I sat down with three ringed seals (above from left to right: Gus, Trad and Dick) to ask them what their perspective was on global warming, polar bears, fish and living on a rock instead of in a house.

Superficial Gallery: Thanks for taking the time, guys.  I can’t help but notice that this rock you are having me sit on is covered with crap.  Do you have any chairs?

Gus: A rock is a chair.  The first chairs were rocks.  Or logs, I guess.

Dick: This is stupid.  (jumps in water and swims away).

Gus: You will have to excuse Dick, he is very impatient.

SG: That’s fine, it will be easier to transcribe with only two of you.  So – the rock is all I get to sit on.  That’s fine.  But it does make me wonder what you guys do for shelter.  I mean, it’s really cold here.

Gus: Not  as cold as it used to be, but yeah.  It can be pretty miserable.  But we have evolved to keep ourselves warm in this climate.  That’s pretty basic science.  And I am not sure how you think we are going to be building bungalows or something.  We don’t have hands.  Or legs, really.  Just flippers.  Can’t hold anything with a flipper.

SG: Fair point.  So you mentioned it is not as cold as it used to be – you are feeling the effects of global warming?

Gus: I don’t know about global, as I don’t travel a lot, but I do know it is getting warmer here.  And I love it.

SG: Really?  It has not affected your ecosystem adversely?

Gus: Ours?  Hell no.  It has done wonders for us.  Just because we live in a cold climate doesn’t mean we want it cold all the time.  We sun ourselves.  Thus, we must like the warmth.

SG: What about the fish you eat?  Are they bothered by the changes?

Gus: So no, the fish are fine.  They swim around – we eat them, nice nice.

SG: So the only thing it has affected is the polar bears?

Gus: Yes, thank goodness.  Those bastards are having a tough time.  And I say let ’em drown.

SG: But they are an important part of your ecosystem.

Gus: The part that eats us… 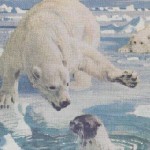 Gus: But nothing.  They wait around by a hole in the ice for us to come up to breathe and when we do they eat us.  They do it to whales to. And you humans looooove whales.  So why are you all crying about the polar bears?  They are vicious predators and should be relegated to zoos or trained to carry explosives into enemy encampments.

SG: It all ties together though.  Without them, there would be too many seals.

SG: But if there are more seals, there would be less fish.

SG: I think this is pretty shortsighted of you.  I mean, the world is designed to have some things eat other things, and that’s how things stay balanced.  You need to look at the bigger picture.

Gus: No, I really don’t.  Look.  The planet has land and water.  Ice is neither of those.  So if the polar bears had their whole game plan based on something that can DISAPPEAR then you can say that natural selection is now penalizing them for their dumb idea.  As for balance…we eat fish.  Nobody feels bad for fish.  Did you ever see someone protest the Tuna being caught in the Dolphin nets?  No.  And you never will.

We seals are cute and cuddly looking.  Polar Bears are big and mean and deadly.  So every time you see a picture of a polar bear swimming in the open ocean, don’t think about it as some cuddly fellow who should be rescued.  Think about it as a monster who, if he had some ice to stand on, would be ripping off my wife’s head and eating it.

SG: You are an incredibly selfish creature.

So – after the interview, I got up off the crapstained rock and went back to my boat with a fresh perspective on global warming, how self centered seals are and just how mean polar bears are.  And also eating seals.  Let’s eat them.  Eskimos do!