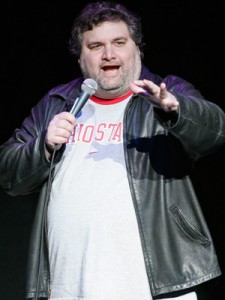 …and surprisingly, HBO did not see it coming.

Artie Lange was booked on the first episode of Joe Buck Live Monday night. He got things rolling by following up a Buck comment about TMZ with, “what’s your second favorite website? SuckingCock.Com?” Buck then seemed to fight his way through the rest of the segment and tossed in a couple of weak barbs of his own.

Joe Buck, if you aren’t familiar with him is, simply put, a whiny, pretentious, jackass of a sports announcer, who FOX unfortunately loves. Which means we get Joe Buck for every big game FOX does. Hello ruining of the World Series. Hello showing no emotion when David Tyree makes one of the sickest catches in Super Bowl history. Hello being a jackass when Randy Moss does the fake crowd mooning pose (yes, Buck was the dude who went crazy over that).

Anyway, Lange basically spent 7 minutes on HBO and then 7 minutes on the online post show skewering Buck. The best moment came when he referred to Buck as a “regular Bob Costas”, since Buck tries way too damn hard to be Costas and fails miserably.

Afterward, the HBO folks hoped having Brett Favre on the show would be the news from this show. Ha. Not a chance. No one gives a damn about Brett Favre anymore, but Buck getting ripped hard? Most sports fans have been waiting patiently for that.

Artie bordered on bad taste and was mean spirited, according to HBO, what the hell did they expect?