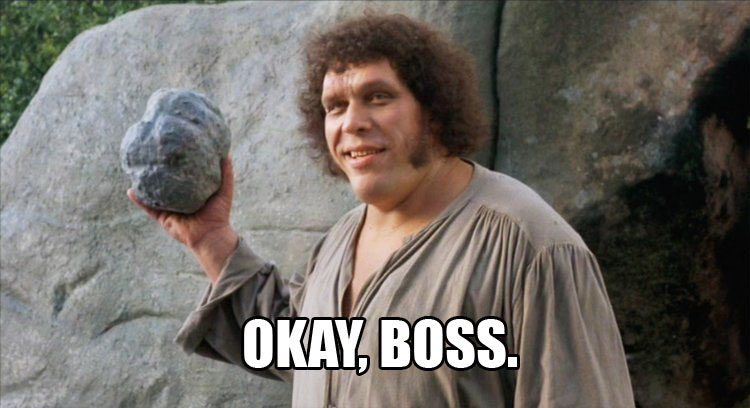 Recently, I had the opportunity to see ‘The Princess Bride’ on the big screen at The Florida Theater and listen to a Q&A with Cary Elwes afterward. I had always harbored a secret fear that Cary Elwes would be one of those Hollywood actors who was snobby, rude and full of himself. However, I was pleasantly surprised that he was exactly the opposite! But this article isn’t about the Dread Pirate Roberts. It’s about Fezzik, also known as André the Giant. 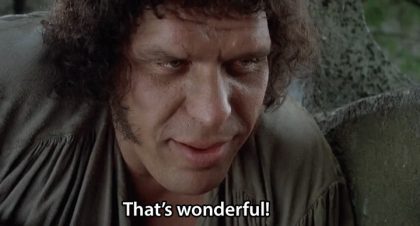 Unless you’ve been living under a rock, you probably know who André the Giant is, whether it be from his wrestling career or from his memorable role in ‘The Princess Bride’. But like me, you may not know some of the more fun and interesting things about this colossal human being.

He was born André Rene Roussimoff on May 19, 1946 in Grenoble, France. It was quickly determined that André suffered from acromegaly, or “giantism,” a endocrynological disorder that causes the body to secrete excessive amounts of growth hormone and produces continual growth, especially in the head, hands and feet, and which he inherited from his grandfather. He left home at 14, trained with French wrestling champion Frank Valois, then wrestled as Jean Ferre in Montreal, and “Monster Roussimoff” in Japan. Valois eventually set up a meeting with Vince McMahon, Sr and Andre debuted in Madison Square Garden as “André the Giant” in 1973. 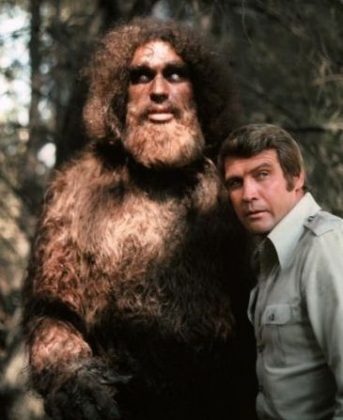 He was 7’4″ tall and weighed approximately 529 lbs at the end of his life. (For reference, Shaq is ONLY 7’1″ and 344 lbs according to Wikipedia.) He was known for being a legendary drinker, since alcohol was the only “medication” he could take to deal with the pain of constantly toting around over 450 lbs of body weight. Cary Elwes writes in his book, “Instead of using a regular glass, André drank from a beer pitcher, which looked a lot like a regular glass in his hands. In reality, it was 40 ounces of alcohol, which he nicknamed ‘The American.'” ‘The American’ consisted of anything and everything behind the bar poured into a 40-ounce pitcher. Elwes said that André would drink several of these in a single sitting. “I’ve never tasted airplane fuel,” Elwes said, “But I imagine it’s very close to what that must taste like. It’s very potent indeed, and I remember coughing a lot. But to him, it was like chugging water.” According to Ric Flair, they once drank every bottle of vodka on board a plane while on a flight from Chicago to Japan. 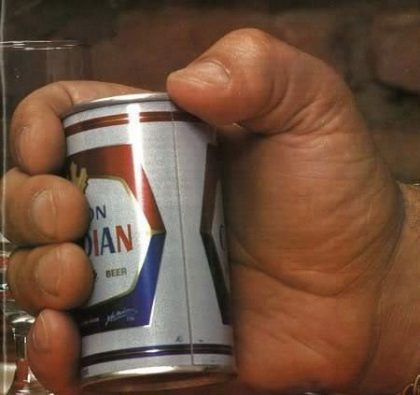 And while André could typically handle his alcohol, while filming ‘The Princess Bride’, he got so drunk one night that he passed out in the lobby of the hotel and, instead of waking him, the managers simply decided to place a small velvet rope around his unconscious body. Elwes described it as seeing “an unconscious 500-pound Gulliver spread out on their very ornate carpet.”

While filming on location in England, Director Rob Reiner asked André how he normally got around, since he had trouble walking long distances. André reportedly told Reiner he had an ATV that he rode when he was home on his family’s farm. So Rob Reiner found the only ATV in England and brought it to the set for André to use. Cary Elwes remembers André zooming around like a kid on the ATV every day while they were filming. André also talked Elwes into trying out the ATV on the first day of shooting. Elwes broke his big toe on a rock and had to deal with it throughout the rest of the filming. 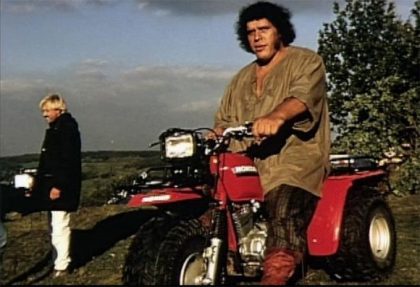 Another memory Cary Elwes recounted was that André called everyone “Boss” regardless of whether they were in charge or not. So when you asked him to do something, he would always reply with “Okay, Boss” in his deep, booming voice.

By all accounts, he was an extremely warm and gentle person to his friends and people he liked. He would reportedly cover Robin Wright’s head with his huge hand to keep her warm when it got particularly chilly outside while filming. He supposedly always wanted to see a Broadway play but never did because he didn’t want to block the view of anyone unlucky enough to be seated behind him. And he was “Uncle André” to Dwayne “The Rock” Johnson.

At 5, I never knew why people got so excited to see him.. to me he was just "Uncle Andre";) #MissU #TBT pic.twitter.com/ZSd6XigPHc

However, if he didn’t like you, you were in trouble. According to pro wrestler Arnold Skaaland, André was drinking at a bar by himself when four patrons started harassing him. After reaching his breaking point, André chased the unruly patrons out of the bar, who then locked themselves inside a car. So, André flipped the car over with all four inside. Lesson: YOU DO NOT MESS WITH A GIANT. 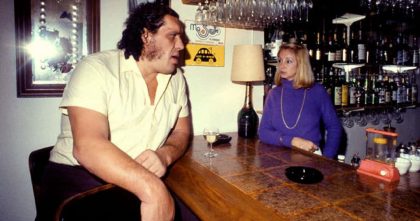 Unfortunately, his Gigantism caught up with him and he died of an apparent heart attack in 1993 at the age of 46. After he was cremated, his remains weighed an incredible 17 pounds. However, he lived well and lived large. To put it in his own words: “I have had good fortune. I am grateful for my life. If I were to die tomorrow, I know I have eaten more good food, drunk more beer and fine wine, had more friends and seen more of the world than most men ever will.”

I highly recommend you check out Cary Elwes’ book As You Wish: Inconceivable Tales from the Making of The Princess Bride for more stories of André’s antics on set and with his fellow cast members.

Filed under: Andre the Giant, As You Wish, beer, Celebrities, Princess Bride, wrestling