Ask Coley Cooks – And some of The Next Food Network Star 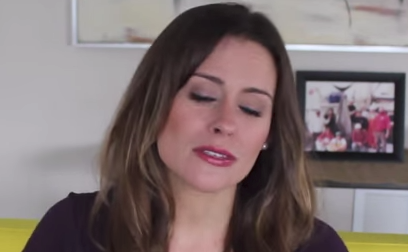 My friend Coley the big shot is doing a LOT of important stuff these days.  One of them is NOT getting me a new picture.  So I am just going to use increasingly stupid screen shots from her YouTube videos until she ponies up.

That said, I love her to death and insist that she get famous so that I can mooch off of her.  So here she is answering my (and more importantly, your) questions about The Next Food Network Star, and some other stuff, too.  And heeeere weeee go!

Acadia: Why won’t you do a show where you cook stuff that I think up?  I have a lot of good ideas.  Like a spaghetti pita sandwich.  That’s good eatin’.

Acadia:  Why didn’t Alton come back?  Is Alton evil?

Coley:  I don’t know why Alton didn’t come back, but I can make some guesses. That he hates the show and no longer wanted to be associated with it? That’s solely based on his attitude and behavior during our season. Is he evil? He’s an evangelical christian, so you decide. If I were to write his biography, I’d call it “The Devil Wears a Bow Tie.”

Dan Brill: What’s the ingredient that Nicole most fears to work with? Does she dislike eating that food?

Coley:  Well I have no interest in eating all the weird s*** that shows up on Chopped – weird organ meats, things in cans, soda, etc. So, yeah, all that stuff. But I find rice to be one of the most difficult things to cook perfectly. It’s so simple, and yet so easy to f*** up. (Can I say f*** here?) ed note: guess not If I were forced to cook rice on the show, I’d be scurred.

Jenn Martinelli:  Do the contestants spend time hanging out together off set? Since we don’t get to see like on Top Chef

Coley:  YES. Arguably too much time. We spend entire days locked in a room together with production assistants aka babysitters. We’re forbidden from talking about the show while together unless it’s on camera, and there is always someone there to shut us down if we try. There were a lot of times when we weren’t allowed to speak, period. It was crazy.

Jenn Martinelli:  Related: where do they stay/live?

Coley:  We all stayed in a hotel in LA and when in Vegas at Caesar’s palace. The rooms at Caesar’s were amazing! But when we were back at the hotel we weren’t allowed to communicate with each other at all. We all used to sneak phone calls to each other on the hotel phones, and Emma and I constantly got caught.

Jenn Martinelli:  How long in actual real time does it take to film all the episodes?

Coley:  A few days, depending. It took a lot longer when there was more of us, and got shorter as there were less of us.

Jenn Martinelli:  How accurate is the show’s portrayal of people’s personalities? Do they edit a ton and really change how people actually behave to make them bigger villains or heros etc?

Coley:  I mean, I think the show portrays people fairly accurately, but what is shown is manipulated by so many factors: there is the culture shock of being sequestered and handled by baby sitter all the time and restricted from things like speaking or going to the bathroom without asking permission, not having control of anything, etc. There’s also the element of competition and being baited by the producers to say things like “I came here to win!” and to show your competitive side, why you deserve to win, and why everyone else sucks. I always hated that. But you literally couldn’t leave the room until you gave them what they wanted, so at some point most of us just succumbed to the drama. Then, there’s the editing. So you’re never seeing the whole story. They put different facial expressions and sound bites in different situations to create conflict. There wasn’t really much conflict between any of us, and what was there, wasn’t what was depicted on tv. They definitely vilified Sarah the worst, she’s really a nice person and got along with us all.

Ask your questions in the comments and she will answer them.  If she doesn’t, there will be repercussions!  Not sure what, but I am pretty sure I can do things to people with my mind.