The Avengers – A Review 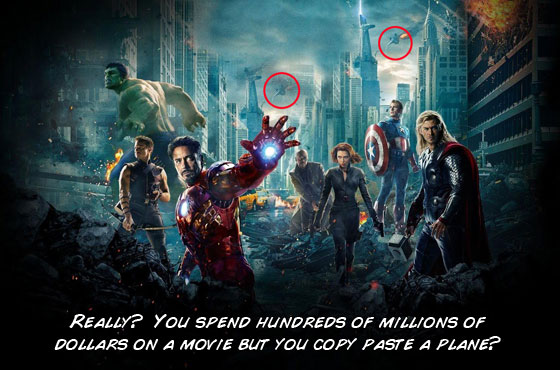 I really don’t want to spoil this movie for anyone. Well, at least not the very end part (stay until after the credits).  The rest of it is sort of, eh?  What would I really be spoiling?  It isn’t like Iron Man is going to die.  These are franchises they are working from here.  These characters are going to be starring in their own tent pole movies for years to come.  Except probably Hulk and Thor and the lame arrow guy and Scarlett Johansson.  They won’t be getting any more movies of their own.  So maybe they die?  DO THEY?  Oh come on of course they don’t.  And I don’t need to tell you what it’s about, either.  Who cares?  I’m just going to go through the characters and major (non plot) elements one by one and why I give the movie 3.5 out of 5 Captain America shields!

Gwyneth Paltrow:  I give her 1000000 bony skeletons out of a possible 5.  Many people might think the biggest CGI achievement of the movie is how awesome the Hulk is.  It is actually making that hay-haired rickety monster look like she has an ass.

Joss Whedon: The directing was fine.  I mean, it’s a big comic book.  And truthfully, it is the BEST comic book on a movie screen since Superman II (kneel before Zod) bearing in mind that movies like The Dark Knight are not comic books.  But the writing made me mad.  It had good laugh lines and there was a lot of fun in it but there were a couple of things in there that were just ridiculous and one would think they would have thought a little harder about it.  No joke.  One part in particular featuring the arrow guy. Whedon gets 4.5 giant foreheads out of a possible 5 and you all need to stop kissing his butt. 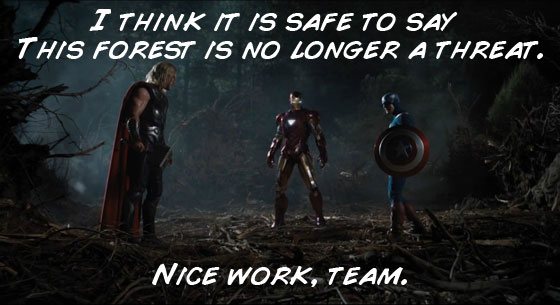 The Arrow Guy: I refuse to call him by his “Avengers” name because he is useless.  I don’t read Marvel (I’m a DC guy) so I don’t know if he is “awesome” in the comic books but he sucks in this.  Useless.  They could have replaced him with “The well trained cop” or “a baker” or maybe “a pointy shoe”.  I don’t have anything good to say about him.  0 arrows out of a possible 1 arrows.  Pfft.  Arrows.

Iron Man: He was better in this than he was in Iron Man 2.  But the schtick is getting old.  He needs some genuine peril.  He can’t just keep being the wisecracking playboy who has a new suit every movie.  It’s like he is wearing a car and every year they need to mess with it just a little.  Here’s an idea:  Maybe there is a movie where the Gwyneth Paltrow girlfriend character gets hurled into the mouth of a giant wolf who then realizes that he has Gwyneth Paltrow in his mouth and in a last minute change of heart, jumps into a volcano and saves us all from Gwyneth Paltrow.  Then Iron Man could be sad for a while but then get over it.   I give him 3.5 AC/DC tapes out of 5 in this one, though.  He had good lines. 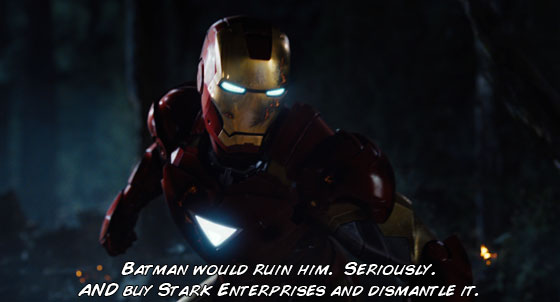 Thor and Captain America: I love Captain America.  Thor makes no sense.  Is he like Superman?  He can fly and seems to be indestructible.  AND the villain (Loki) is his brother so wouldn’t they just be the same and cancel each other out?  I don’t have high hopes for Thor.  Captain America, though.  I think I might be in love with him.  As a dude.  I give Thor one hammer out of 100 and Cap gets 50 shields out of 10.  Captain America is soooo dreamy.

Nick Fury: I don’t really understand who he works for, and I question his skills.  He is surrounded by technology but they can’t get him a new eye?  He is in charge of all of this super security but apparently he can’t *REDACTED BY SPOILER POLICE*.  Yeah, there really isn’t anything I can say about Nick that isn’t a spoiler.  Except the part where he opens the time hole and tries to get Superman out of DC world but gets Green Arrow by mistake which meant there were TWO useless arrow guys.  Sad.  I give him two eye patches out of five. 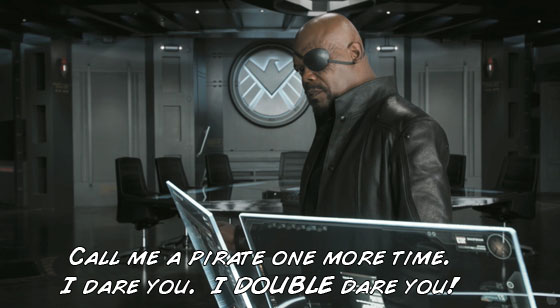 The Hulk:  Hands down, no doubt about it, The Hulk was the best part of this movie.  His character was the most fun.  He got some great lines and the single biggest laugh/cheer/people jumping out of their seats and spilling their Twizzlers and notepads moment of the whole movie.  They did something they can work with and the CGI was truly incredible.  He gets the highest number of SMASHES allowed by law. 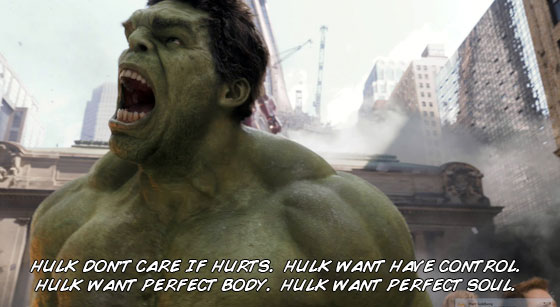 Loki: Whatevs.  He might be a good villain but his plan was really stupid.  I blame the writers.  I don’t have anything against him, but I also don’t have anything for him.  MEH.  I give him 1 meh out of a possible 1 meh.  Witty retorts aren’t all a villain needs.  They need a solid plan.  The Mayor from Buffy had a better plan.  I’m looking at you, Whedon!  Loki gets an incomplete.  🙁 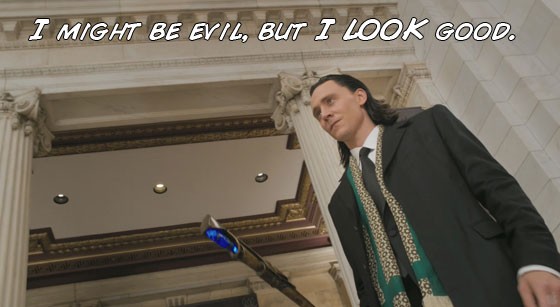 Scarlett Johansson / Black Widow: I saved her for last because I was still trying to figure out what to say because I am legitimately torn.  First the bad!  I’m sorry, but if you are supposed to be a professional assassin then you need to have at least SOME kind of definition.  SOME.  Not a ton.  But at least enough to make it look like  you go to the gym for reasons other than assassinating people who happen to be in gyms.  And it is not because she is just a “gun” kind of assassin.  She has a big scene (shown in trailers so not a spoiler) where she is tied to a chair and she beats up three guys and jumps all over the place.  I don’t buy it.  They managed to highlight her cans during the fight (they jiggled and seem to be an effective part of her arsenal) but they also had to highlight her teacher-arm wobbly triceps.

Once she was in the suit it was better, and I don’t want you to think that all that matters about her character is her looks, but it DOES matter.  Think about Linda Hamilton in T2.  SHE looked like a word class assassin.  ScarJo looked like a chick who said to the producers: “Look, if I hit the gym hard and lose 20 pounds and get cut for this movie my boobs will DISAPPEAR!  Ask Ryan Reynolds!”  And the producers just said: meh, ok then.  She was in good shape.  But the number of physical jobs that you can be in less than tip top shape for is restricted to golfers and baseball pitchers.  NOT strangly and stabby assassins.

On the good side, I was worried about why she was even there.  But by the end of the movie I wasn’t.  She is sort of like the “smart” one.  Not scientist smart, but Batman smart.  She is sneaky and clever and didn’t seem out of place (except for the physical parts).  She was infinitely better than the ridiculous arrow guy and I sort of think that if they replaced arrow guy with a really mean gorilla and gave the gorillla to Black Widow she would be formidable.  I don’t know what her unit of measure is.  If I say boobs I will be called misogynistic.  If I say bullets I am letting her milky, no definition calves skate by.  So I guess I will say my credulity meter for the concept of Black Widow has been officially filled to 65%.  Well done.  Oh, and she tried to make it fun and realistic instead of the ridiculous crap that stupid Gwyneth Paltrow did!  And since she is so pretty she gets two pics.

Overall:  It was worth seeing.  I would not stand in line, but I would not want to miss it by not seeing it in the theater.  The 3D didn’t add anything as far as I can tell, but it wasn’t distracting.  Just go watch a comic book and have a good time!

BONUS:  Competing with Captain America in my heart is the chick from How I Met your Mother as one of the SHIELD people.  She was awesome.  She should get her own movie.  And maybe they should reshoot Batman and make her Catwoman.  I love her and am going to start a campaign for getting her a best supporting actress nomination.  Yeah.  She’s goood. 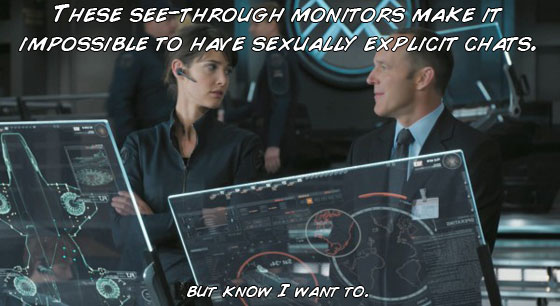