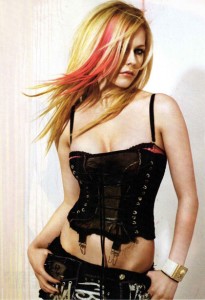 I don’t know what it is about Canada but they seem to turn out angry female singers.  Maybe because they have to wear parkas 10 months of the year and that is flattering to no girl, no matter how thin she is.  Could it be the dry air frizzing out their hair and dulling their skin?  I really don’t know.  I’m basing this on Avril and Alanis Morrisette; Shania Twain skewed my data and then I had to go puke and lost my train of thought.  I’m pretty sure I can’t name a single song/album of Avril’s.  But, if you like the irrationally angry/poser punk/trying too hard to seem edgy look, then Avril is your girl!  And, just for this tiny segment of the population, I got 3,617 pictures of her.  If you like tongue pix, we have 20 of hers.  And 20 is a lot of one person.

She isn’t even interesting enough to hit the gossip rags.  I have no idea who she is/was fucking, where she eats dinner, what designers she likes, or…well any of the stupid shit Perez seems to consider newsworthy.

She’s won a bunch of Nickelodeon Kids’ Choice Awards and was actually nominated for eight Grammy Awards.  One of them was Song of the Year and another was Best New Artist so I guess it wasn’t a bunch of technical awards or like…Best Font on the Liner Notes.  You know, all those stupid shit ones that really no one cares about that are given out at some un-televised breakfast buffet the day before.  Is this more proof the Grammys suck and are a puppet of Clear Channel or that I should revise my opinion of this chick?  This was kind of rhetorical if you didn’t pick up on that.