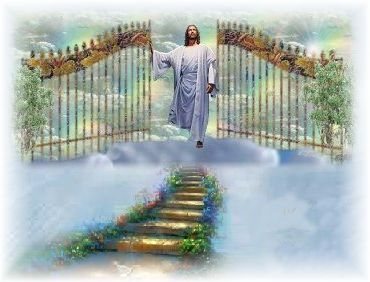 In late 1995, it was getting a little crowded in Heaven, so God decided to change the admittance policy. The new law was that in order to get into Heaven, you had to have a really bad day on the day that you died. The policy would go into effect at noon the next day.

So, the next day at 12:01 the first person came to the gates of Heaven. The Angel at the gate, remembering the new policy, promptly asked the man, “Before I let you in, I need you to tell me how your day was going when you
died.”

“No problem,” the man said. “I came home to my 25th-floor apartment on my lunch hour and caught my wife having an affair. But her lover was nowhere in sight. I immediately began searching for him. My wife was half naked and yelling at me as I searched the entire apartment. Just as I was about to give up, I happened to glance out onto the balcony and noticed that there was a man hanging off the edge by his fingertips! The nerve of that guy!  Well, I ran out onto the balcony and stomped on his fingers until he fell to the ground. But wouldn’t you know it, he landed in some trees and bushes
that broke his fall and he didn’t die. This ticked me off even more. In a rage, I went back inside to get the first heavy thing I could get my hands on. Oddly enough, the first thing I thought of was the refrigerator. I unplugged it, pushed it out onto the balcony, and tipped it over the side. It plummeted twenty-fivestories and crushed him! The excitement of the moment was so great that I had a heart attack and died almost instantly.”

The Angel sat back and thought a moment. Technically, the guy did have a bad day. It was a crime of passion. So, the Angel announced, “Okay, sir. Welcome to the Kingdom of Heaven,” and let him in.

A few seconds later the next guy came up. To the Angel’s surprise, it was Donald Trump.  “Mr. Trump, before I can let you in, I need to hear about what your day was like when you died.”

Trump said, “No problem. But you’re not going to believe this. I was on the balcony of my 26th floor apartment doing my daily exercises. I had been under a lot of pressure so I was really pushing hard to relieve my stress. I guess I got a little carried away, slipped, and accidentally fell over the side!  Luckily, I was able to catch myself by the fingertips on the balcony below mine. But all of a sudden this crazy man comes running out of his apartment, starts cussing, and stomps on my fingers. Well, of course I fell. I hit some trees and bushes at the bottom, which broke my fall, so I didn’t die right away. As I’m laying there face up on the ground, unable to move and in excruciating pain, I see this guy push his refrigerator (of all things!) off the balcony. It falls the twenty-five floors and lands on top of me, killing me instantly.”

The Angel is quietly laughing to himself as Trump finishes his story. “I could get used to this new policy,” he thinks to himself. “Very well,” the Angel announces.  “Welcome to the Kingdom of Heaven,” and he lets Trump enter.

A few seconds later, Bill Clinton comes up to the gate. The Angel is almost too shocked to speak. Thoughts of assassination and war pour through the Angel’s head. Finally he says, “Mr. President, please tell me what it was like the day you died.’

Clinton says, “Okay, picture this:  I’m naked, inside a refrigerator….”