Bald Japanese Guys are Perfect Example of the End of Days 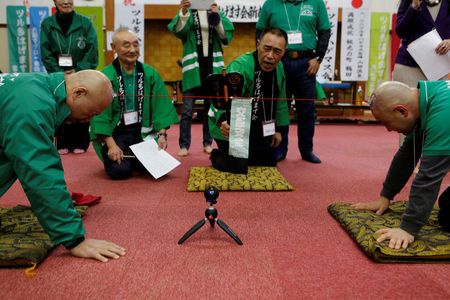 So apparently middle-aged, bald, Japanese guys needed to bond so they started a club and had a little bald guy olympics.  The event, which is held every year, features dudes putting suction cups on their shiny melons and having a little tug of war.  According to one happy participant, 64 year old Masatomo Sasaki:

“I feel proud. Or maybe I should say, I feel good about being a bald man,” Sasaki said, adding that he started losing his hair when he was 40. “And that is thanks to this bald men’s club.”

What’s the harm in having 65 bald guys have a bald guys’ party?  It’s been going since 1989 so if it is actually going to cause the End of Days like I said in the headline they are taking their time about it.  Here is the harm:

This whole thing where people need to get together to tell each other they are great because there are other people like them is how we get extremists on all sides.  And while the Japanese bald guys started doing things the hard way back when the only way you could organize was with photocopied flyers, now, with the Internet, we are now nothing more than a big Venn diagram with nothing in the middle but “on Earth”.

Remember the phrase: “What’s wrong is wrong even if everybody does it?”  That is not a thing anymore.  We have spent so much time “banding together” against…whoever, that we lost the fact that every crazy person does not need a mob behind him or her.  And even if there are 1000 people who agree with the crazy person, the person is not less crazy.  They best example of this is ALL RELIGIONS but here are some other winners:

I will be revisiting this thesis (that bonding together as smaller groups will ruin the planet) over the coming months because we can see it happening in front of us in a ton of ways.  So get ready.  I will be back to try to destroy The Bachelor.