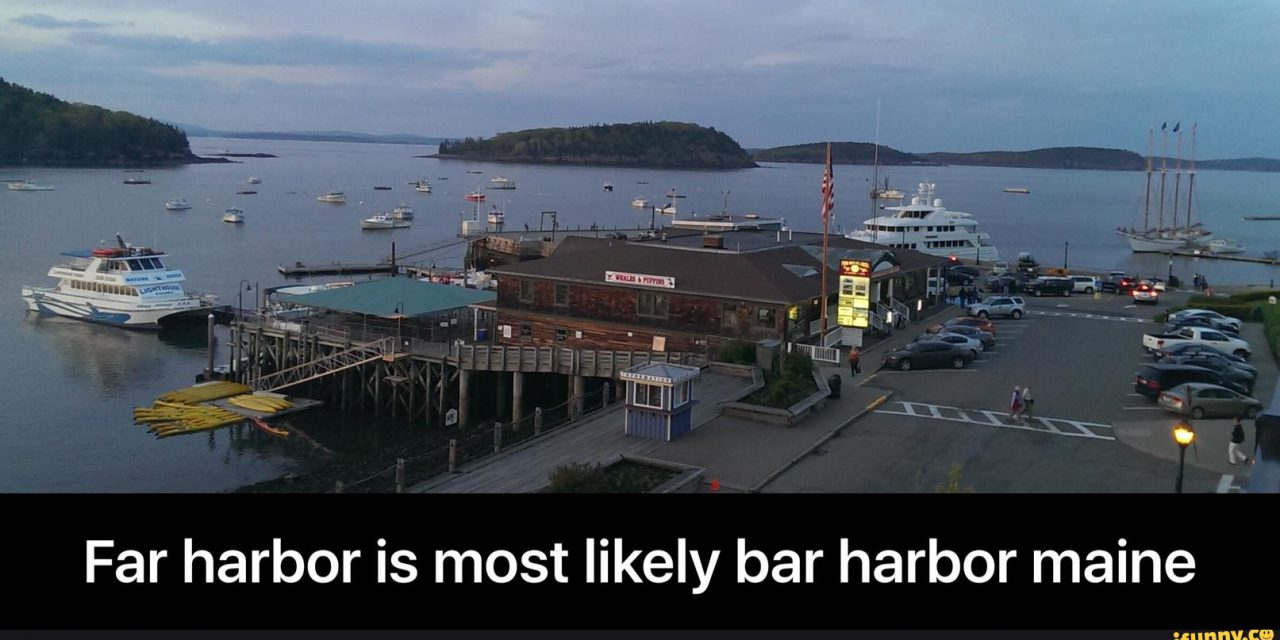 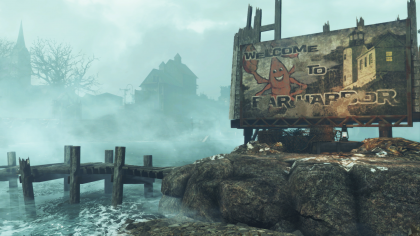 Fallout 4 has made visiting Boston a new and different kind of tourism experience. People in bright blue jumpsuits with 111 on them have been appearing in Boston looking for adhesive. The general locations are a bit off sometimes but all the sights of the wasteland version of Boston are actually there in reality. (Fair warning: Diamond City is a little less populated and there are no ghouls in the Old State House.) If you’re familiar with Boston playing Fallout 4 can be a bit unsettling. Downtown Crossing, where generations of shoppers have battled to the death in Filene’s Basement, isn’t a landmark that an average player would recognize but it’s there in Fallout 4. Bethesda is really good at lifting details from a real place and putting them in the twisted post-apocalyptic version. 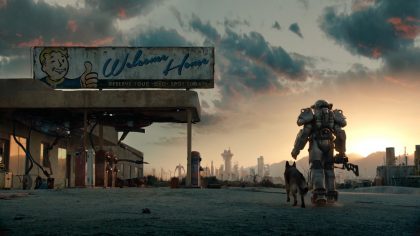 Welcome Home. The author and his little dog are ready for Far Harbor.

That’s why I’m so pumped about Far Harbor. Far Harbor is based on the real town of Bar Harbor in Maine. I live right nearby! There won’t be any need for a suspiciously perfect girlfriend to arrange a sight-seeing Fallout 4 themed trip for me. Taking out the sea monster skeletons and the Children of Atom fanatics everything in the trailers looks familiar. As I type right now the Holy Fog is rolling across my lawn. I don’t think it’s radioactive but my Pip-Boy is broken so I don’t know.  For those of you educated in the American school system that’s about a five hour drive north from Boston along the glorious New England coastline. Mount Desert Island is almost tailor made for the Fallout makeover with enough wilderness for a menagerie and interesting locations for the Sole Survivor to explore. 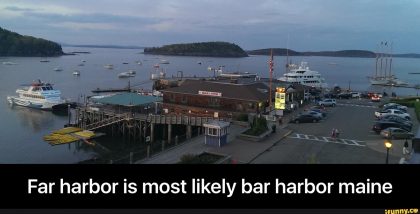 Far Harbor features the largest landmass for an add-on that Bethesda Game Studios has ever created. They’ve promised it will be filled with new faction quests, settlements, lethal creatures and dungeons. For you virtual stalkers I think my place will be right on the edge of the map. If you’ve seen the view of Far Harbor with the sea monster skeleton I’m on the other side of Frenchman’s Bay. Sure that’s a little disappointing but I’m not sure I want vacationers with tricked out Gauss Rifles exploring my driveway. My mutated hound hasn’t mutated yet and I’m far more likely to be Burgess Meredith losing his glasses in Time Enough at Last than any boss level monster.

The new DLC starts with a mission from Valentine’s Detective agency that leads you on a search for a young woman and a secret colony of synths. The only requirement to get to Maine will be that you’ve unlocked Nick. The trophies (Steam Achievements for us PC users) have already been leaked and posted on Exophase (via DualShockers). It’s pretty standard, complete quests, discover new locations, kill sea creatures and have fun creating mayhem. My personal theory is that Acadia fled radioactive North Carolina and came home to publish the Islander’s Almanac and it’s full of tongue drawings of cute synths he’s seen. He probably has me doing the drawings. To quote Virgil: “Dam these big clumsy green fingers.” 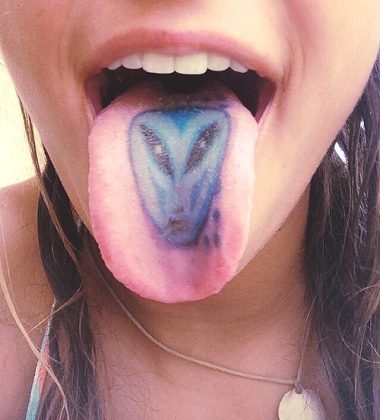 What Acadia’s version of the Islander Almanac will look lke

“The way life should be” and “Cleansing the land” seem to be the two endings for the plot of Far Harbor. I’m pretty sure that the native population should be left alone to embrace our unique radioactive weirdness and tongue obsessions but I was totally wrong about the Brotherhood of Steel going into Fallout 4 so it may be there’s a little cleansing needed. I’ll find out next week when we can game in the post-apocalyptic version of my own back yard.

Jackson Labs – The home of more than 7,000 strains of genetically defined mice it’s impossible not to think Mole Rats in a Fallout setting 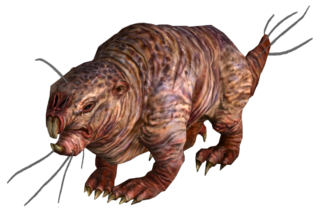 I’m hoping there’s another version of Curie if the Fallout version of Jackson Labs has 7,000 varieties of Mole Rats

Jordan Pond – Home to the Jordon Pond House which is one of my favorite restaurants (Popovers and they bring sugar water on the side so your lemonade is just right) Jordan Pond is a glacier formed tarn with a depth of 150 feet. Since the Bubble Rocks look like a giant pair of breasts there is no way any video game developer could resist this location. 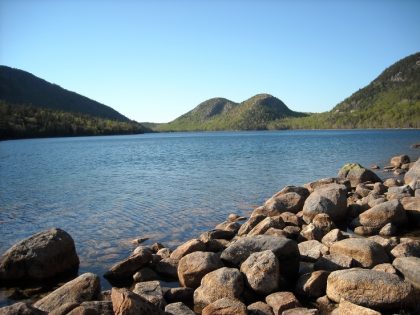 There’s just nothing else they could possibly be 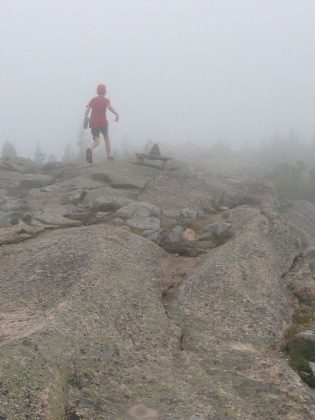 Holy Fog appears every time I go up to the summit. The recreational cairns called Inuksuk by the lumbersexuals who build them are not only an eyesore but often lead hikers astray because as you can see it gets dam foggy.

Granite Quarries – Anyone who’s played Fallout 4 knows how much Bethesda loves Quarries. At the height of the granite industry on Mount Desert Island there were 49 different quarries supplying the unique pink island granite to the world. Surely one of them has a dagger to rival Kremvh’s Tooth at the bottom.

These are the Otter Cliffs where you can find rock climbing enthusiasts year round. It’s one of the scariest places for ice climbing because the salt spray makes the ice on the rocks very dangerous. An excellent view of pink granite.

US Naval Security Group (NAVSECGRU) – NSGA Winter Harbor operated from 1935 to 2002. The top secret facility was instrumental in the Cold War and nobody really knows what on there with the exception of the Wullenweber Antenna Array (Locally called the Elephant Cage because of the ring shape arrangement of antenna masts) which was too big to hide. When I first came up here there were still SAM missile emplacements and Marines with dogs 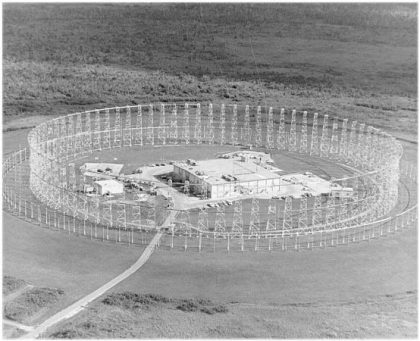 This is a photo of a similar Elephant Cage installation in Guam. The Marines with Dogs were serious about the no Photos allowed signs in Winter Harbor.

Martha Stewart – Sure she seems like a nice lady but ever since she bought Skylands in Seal Harbor for a country getaway she’s been a local boss level monster. Whether it’s fighting with druids for exclusive use of the summit of Mount Cadillac on the New Year sunrise, having little old ladies that drive up her road arrested or trying to ban boats from watching her Fourth of July fireworks show she’s proven to be a b*tch and a half.

This is about the most evil thing I’ve ever seen on the internet.