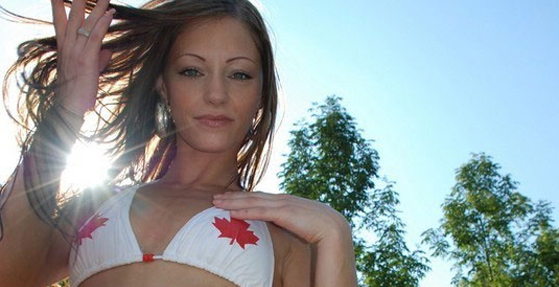 Canada, boobs and the sun. Three things we need.

The Barenaked Ladies are like the Beatles of Canada.  And since I had a lot of friends who went to college in Canada, I was force fed them and the Tragically Hip every goddamn summer.  On the other hand, David Wilcox rules.  But the Ladies never really made it big in the US until this song.  After this I thought they were gonna stay famous but then I saw them on VH1 and that means that you aren’t really that famous.  Not because there is anything inherently wrong with VH1.  It’s just that if VH1 calls you and you don’t have anything else to do, you probably aren’t that famous.

As far as the song goes, it’s pretty good.  It’s not their best song by any stretch.  Their best song is If I had a Million Dollars but that didn’t get famous here for some reason.  If you can find the live version then listen to it.  It’s good.  But do that on your own time.  Right now you are supposed to listen to One Week.  I know all the words and can say them in time with the music.  Not very proud of it, but I’m honest.  Not like you.  I even know the part about the X-Files.  Do you remember when it was good?  Do you remember that they decided to keep the show going even though one of the two main characters left?  What the fuck were they thinking?  That would be like watching The Fat Man without Jake.  Or Garfunkel.  Scully was hot though which reminds me that I was supposed to make a post about hot gingers.  I need to get on that.  But for now, Chikity China the Chinese Chicken video and lyrics after the jump!

Also – I was going to make a lot more Canadian jokes but look at all these angry Canadians who keep getting pissed off on this post.

It’s been one week since you looked at me
Cocked your head to the side and said “I’m angry”
Five days since you laughed at me saying
“Get that together come back and see me”
Three days since the living room
I realized it’s all my fault, but couldn’t tell you
Yesterday you’d forgiven me
but it’ll still be two days till I say I’m sorry

Hold it now and watch the hoodwink
As I make you stop, think
You’ll think you’re looking at Aquaman
I summon fish to the dish, although I like the Chalet Swiss
I like the sushi
’cause it’s never touched a frying pan
Hot like wasabe when I bust rhymes
Big like LeAnn Rimes
Because I’m all about value
Bert Kaempfert’s got the mad hits
You try to match wits, you try to hold me but I bust through
Gonna make a break and take a fake
I’d like a stinkin achin shake
I like vanilla, it’s the finest of the flavours
Gotta see the show, cause then you’ll know
The vertigo is gonna grow
Cause it’s so dangerous,
you’ll have to sign a waiver

How can I help it if I think you’re funny when you’re mad
Trying hard not to smile though I feel bad
I’m the kind of guy who laughs at a funeral
Can’t understand what I mean?
Well, you soon will
I have a tendency to wear my mind on my sleeve
I have a history of taking off my shirt

Chickity China the Chinese chicken
You have a drumstick and your brain stops tickin’
Watchin’ X-Files with no lights on
We’re dans la maison
I hope the Smoking Man’s in this one
Like Harrison Ford I’m getting frantic
Like Sting I’m tantric
Like Snickers, guaranteed to satisfy

Like Kurasawa I make mad films
Okay, I don’t make films
But if I did they’d have a Samurai
Gonna get a set a’ better clubs
Gonna find the kind with tiny nubs
Just so my irons aren’t always flying off the back-swing
Gotta get in tune with Sailor Moon
‘Cause the cartoon has got the boom anime babes
That make me think the wrong thing

How can I help it if I think you’re funny when you’re mad
Tryin’ hard not to smile though I feel bad
I’m the kind of guy who laughs at a funeral
Can’t understand what I mean?
Well, you soon will
I have a tendency to wear my mind on my sleeve
I have a history of losing my shirt

It’s been one week since you looked at me
Dropped your arms to your sides
and said “I’m sorry”
Five days since I laughed at you and said
“You just did just what I thought you were gonna do”
Three days since the living room
We realized we’re both to blame,
but what could we do?
Yesterday you just smiled at me
Cause it’ll still be two days till we say we’re sorry