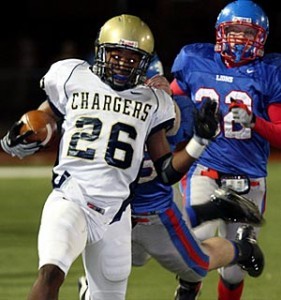 That right there is none other then Barry Sanders, Jr. I do mean son of the Barry Sanders, famous NFL running back who played for the Detroit Lions. The kid is a junior in high school and the comparisons between him and his famous father have already started.

The kid can carry the pigskin, no doubt about that. He is an excellent high school football player and the colleges are already lining up to recruit him. He plays for the Heritage Hall Chargers in Oklahoma and has racked up some pretty impressive numbers this season so far. In five games he has 970 yards and 14 touchdowns and the chargers are 5-0.

Good old fashioned high school football, the kind of ball played for the hometown and your best girl on Friday night. The kid has the moves and the juice in high school and it looks like he is going to be able to go to a good college and get a good education on a scholarship. Can he perform at the college level? Well in a couple years, he’ll find out. Can he make it to the NFL and have a stellar career like the old man? We’ll see. He does show a lot of the Sanders’ flair running with the football.

The kid can move! The team is top notch too, all the kids can play and that is why they win state championships and why Barry can fly. About the only thing holding him back is being the son of a pro athlete. So much pressure, so much crap thrown at them. If he can avoid that, avoid the comparisons and be his own player, yeah, I think he can go far. But it is hard as a fan of the old man not to compare a little bit.

Barry Sr. had a great career in college and a pretty fine pro career, even playing for the Lions he made it happen. I can only imagine if he had a healthy line and the same QB for more then a few games at a time how many yards and touchdowns he would have racked up. One of the few bright spots of being a life long fan of the Lions was watching Barry run. The man is a super hero, able to juke 300lb defensive lineman out of their jock straps.