Bats Use Blood for Tongue Erections 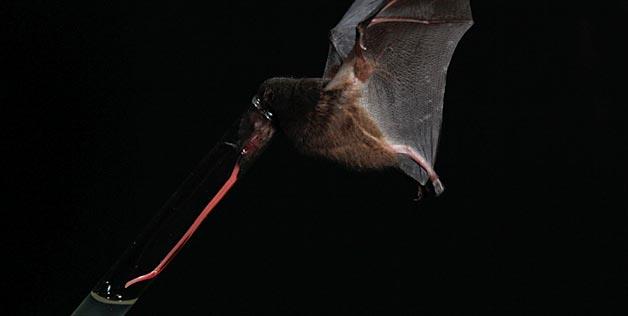 I’m not really sure I need to add anything to this post, since it already has the best title in the history of the Gallery, but since Acadia stole that joke last week, I guess I’ll go with, “Holy hell, have you ever seen how a bat’s tongue works?”

“High-speed video footage has revealed that an increased flow of blood to the tip of the bat’s tongue causes scores of tiny hair-like projections to become swollen and erect, allowing the bat to maximise its nectar-gathering potential with each lap.”

I know we’re a little obsessed with bats and tongues around here, but you have to admit, that’s pretty cool.  You can find the rest of the article here, with a super-detailed bat drinking/tongue erection diagram.  If that’s the kind of thing you want to see. Pervert.

Oh, and “during lapping, the length of the [bat’s] tongue tip was also increased by more than 50%.” That’s 50% more real estate for mocking you, human.

– Celebrity Tongue Pictures in the Mine