Battle of the Blades 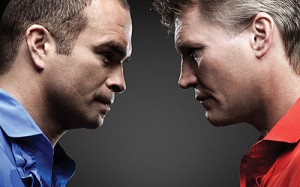 Bob Probert and Tie Domi figure skating? You have got to be kidding me! Last fall the CBC premiered the program Battle of the Blades. I saw the buzz on it but I could not catch any episodes as well.. I am in the U.S. and of course, the best I could do was some YouTube videos.

Hey I don’t watch those kind of shows, no dancing or singing or any of that stuff, its just not my bag. I know a lot of people follow that kind of thing and set their schedule around such shows and are huge, I mean huge as in are you kidding me? huge. Me, not so much, but I love hockey and I had to catch some of this. Imagine my disappointment when I could not catch it live.

The shows premise is pretty simple. Take ex-NHLers and team them up with figure skaters and hold a competition. Yeah, the guys figure skate with the ladies, they have judges, and people get to vote for the best pair each night. Sounds familiar right? But how did they get tough guys like Probert and Domi to agree to such a thing? I mean come on, really? 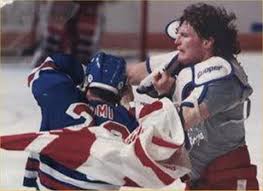 This is the Bob Probert and Tie Domi we all know and love. Two tough guys riding shotgun for their teams, enforcing good, fair play. Take a run at one of the star players and these guys would make you pay, big time. Being a Wings fan, I always liked it when Mr. Probert would put Mr. Domi down on the ice. Of course, during the 80’s, about the only thing I could hope for was a goal by Yzerman and old Bob getting up close and personal with an opposing player. Its not like the Wings won all that many games back then.

Toronto fans probably felt the same way. The highlight of their night was Domi planting some schmuck, who got a little too big for his own drawers, into the ice. Good, old fashioned hockey when the skill guys scored some pretty goals and the tough guys took care of business. So how did these guys end up figure skating? More importantly, should I make fun of them for doing so?

What a lot of people don’t know, is that guys like Probert and Domi have big hearts. When they went to Domi and asked him, he was sure they were kidding, but then they talked about doing it all for charity and he was in. Of course, most people still thought they were crazy for doing a show like this, but then they started asking players and the puck started moving. Probert’s one condition was he had to beat Domi. Gotta love old time hockey players!

You know what sports fans? The show works. A lot of money is raised for charity and we can see some of our favorite players try to ice dance. Kinda funny all around and for a good cause. According to reports, the show was a big hit in Canada and will now be aired in the U.S. as well, starting just before this regular season starts. I’ll be watching and laughing and having a good time at these guys expense, its pretty safe in my living room.

You know, I was going to poke fun at the show and talk about how stupid it is. But you know, it is pretty cool. I’ll leave you with Bob Probert’s performance. I have always been a big fan of Probie, and he will be missed. Bob Probert died this past July, still a tough guy, but a tough guy with a big heart. I hope he didn’t elbow St. Peter as he went through the gate. If the other team is smart, they’ll try not to piss him off.