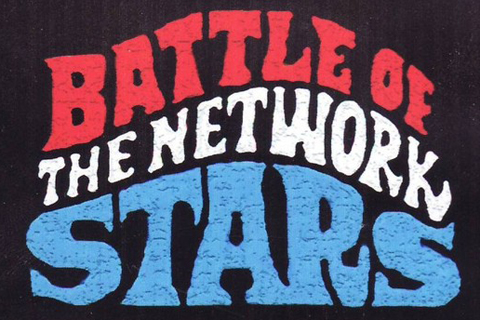 In the 70's words were more American and also more festive.

Ahhh, the 1970’s.  There are plenty of sites devoted to the decade of feathered hair, vans and black light posters, so I am just gonna focus on one particular awesome piece of the 70’s that make me wish that people now were as cool as they were then.  The Battle of the Network Stars was essentially an athletic competition between the big three networks.  They had some events (like the dunk tank) that weren’t really athletic, but overall it was TV personalities busting some ass. 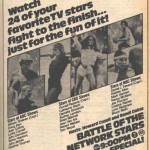 I guess it was that show The Superstars that made me think about it.  None of the ‘celebrities’ in the frigging show are really doing anything right now.  And it got me thinking that it was probably because the bigshots on the regular networks now won’t let people do stuff.  And it sucks even more because there are so many more networks now that the possibilities are pretty much endless.  We could have the smug prick Bobby Flay from the Food Network getting his ass handed to him by the intern kid from 30 Rock in darts or some shit like that.

Hell, for that matter there could be a channel devoted to nothing but showing all the qualifying rounds of the show.  Week one: ESPN vs. Fox Sports.  Week two: Lifetime vs. SpikeTV.  Week three: CSPAN1 vs CSPAN2!  But anyway, the videos I am giving you here are pure frigging gold.  The first one is long but it’s worth it for a few reasons.  And of all those reasons, the most awesome one is NOT the fact that two of the three team captains are smoking WHILE being interviewed by Howard Cosell.  Watch them all after the jump!

Opening Credits – and some Lynda Carter

Yeah – Lynda Carter had big cans.  Well, I guess she still has them, but you know what I mean.

Look!  The guy from Eight is Enough!

I am gonna find some more of these – this is gold.