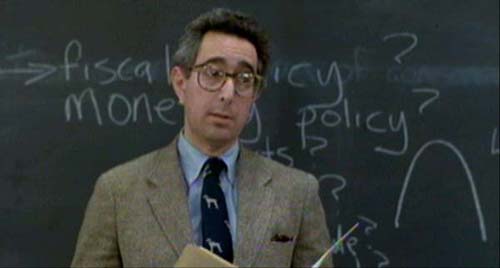 Dude gets paid every time this movie gets shown on TV. Every time.

Ben Stein lost one of his jobs because of one of his other jobs.  So I guess now I am rethinking the title of this post.  Some people don’t have ANY jobs, and this dick has (or had, anyway) 2?  According to the AP:

NEW YORK – Monotone TV personality Ben Stein has been stripped of his Sunday New York Times business column because of his work as a pitchman for a credit monitoring company.

New York Times spokeswoman Catherine Mathis released a statement Friday that said the newspaper decided it would not be appropriate for Stein to pitch for FreeScore.com while writing his column.

So because he is working for this other joint he is all tainted and whatnot and cannot write a column for the Times?  At first I was gonna say this wasn’t fair.  But, as I mentioned before the quote, fuck Ben Stein and his multiple jobs.  Some people have none.  So I hope the Freescore.com guys are paying him a lot, cause he won’t be able to get paid by the Gray Lady.  I wonder if all the other columnists for the Times aren’t allowed to moonlight.  I am pretty sure I saw a Sonic Ad with Tom Friedman in it.  But anyway – screw Ben Stein cause he has at least one job, and that should be enough.

Also – as a side note.  Nothing Ben Stein can possibly do is gonna make people who need to get their credit scores from the Internet switch from him to those signing pirates from freecreditreport.com.  After the jump – a vid of all of those commercials with the lyrics embedded – cause the “I Married My Dream Girl” one is gold!