Better Off Ted: A Review. 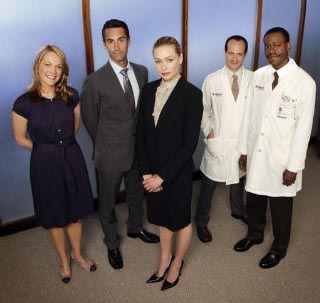 Vange introduced me to this show on ABC, Better off Ted, airing Tuesday nights with new episodes throughout the summer. We usually have the same taste in television (except for a disagreement over a little show called 30 Rock*) so no surprise here that it’s quickly become one of my favorite shows. The show is about Ted Crisp,  head of research and development at Veridian Dynamics, a corrupt mega corporation that makes a wide array of mysterious and mostly unethical products. BoT also follows the many antics of Ted’s subordinates:  Phil and Lem, genius scientist best friends and Linda, Head of Testing and someone whom Ted finds himself attracted to. And his uber boss Veronica, whose cold and clinical personality often clashes with Ted’s moral and conscientious nature. Think of it as Arrested Development mixed with Scrubs, with a little Pushing Daisies thrown in for good measure. And my friends, that is a winning combo.
Some highlights:

*She loves it, I do not. But that’s another article for another time.

Veridian also has some incredibly awesome commercials; I put a couple of my faves after the jump.

Filed under: ABC, Better Off Ted