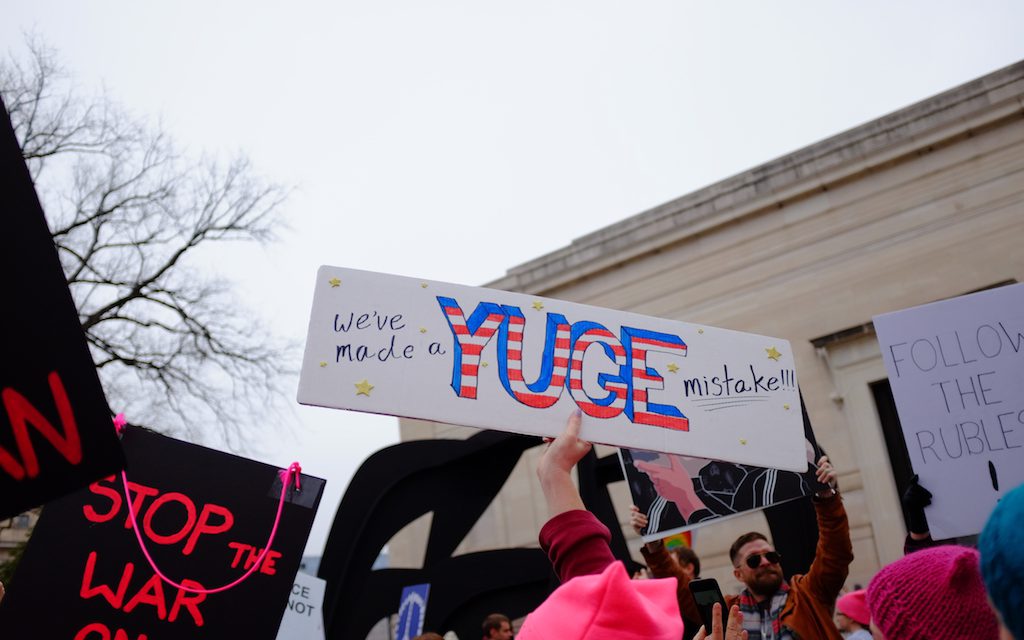 So in case you missed it somehow, because you don’t use the Internet (in which case, how are you reading this? Are you a wizard?), last Friday was a dark dark day in America, as we handed off the presidency to a reality TV star and bankrupt businessman/trust fund baby with tiny hands, a combover, and a terrible fake tan. But let’s not dwell on the absolutely ridiculous details of that. Let’s talk about what happened the next day which is, as Asiz Ansari quite succinctly put it Saturday night on SNL, an entire gender protested it.

Here is a map of all the protests that happened in the U.S. 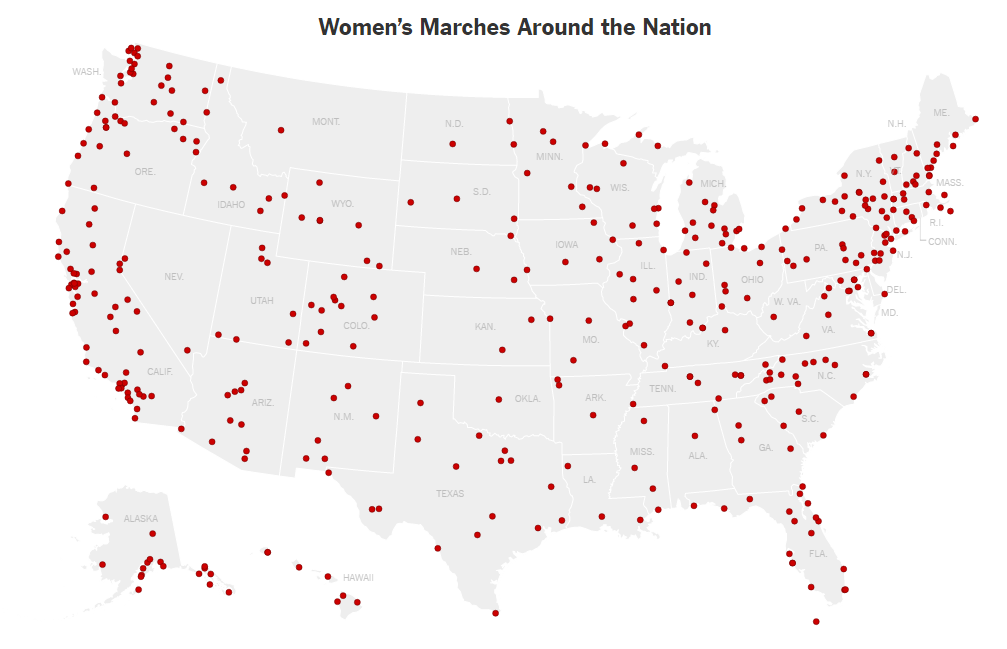 And here are all the marches around the world (outside the U.S.). Last I know, there were over 670 separate marches. 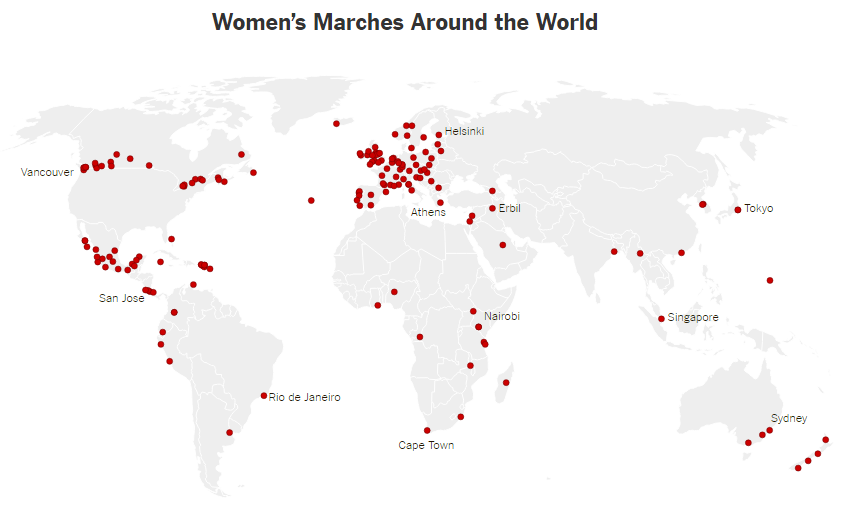 And here’s what I know about what was expected as far as crowd size in D.C. and Boston and what actually happened. DC was originally estimated at 100,000, then upped to 200,000. Actually over 500,000 people were there and I’m still hearing debate on how MUCH more than 500,000. There were 589,000 recorded metro trips by partway through the day on January 21, the day of the march, and certainly thousands and thousands of people also came to the city by the busload. In Boston, the original estimate was 25,000 and actually more like 125,000 people showed up.

So without going too much into all my thoughts about the march because I’ll talk about it more on the podcast, and I know you people don’t have the attention span for a super long article, let me just say this: the march was about protecting the rights that Trump has directly threatened, from women’s reproductive rights to the safety of Muslim Americans, immigrants, LGBTQ folks, and others. His rhetoric is harmful and it’s important that everyone understands that we will not go away or back down in our challenge to these un-American plans. I mean GD it, look what Superman says in the 1940s! 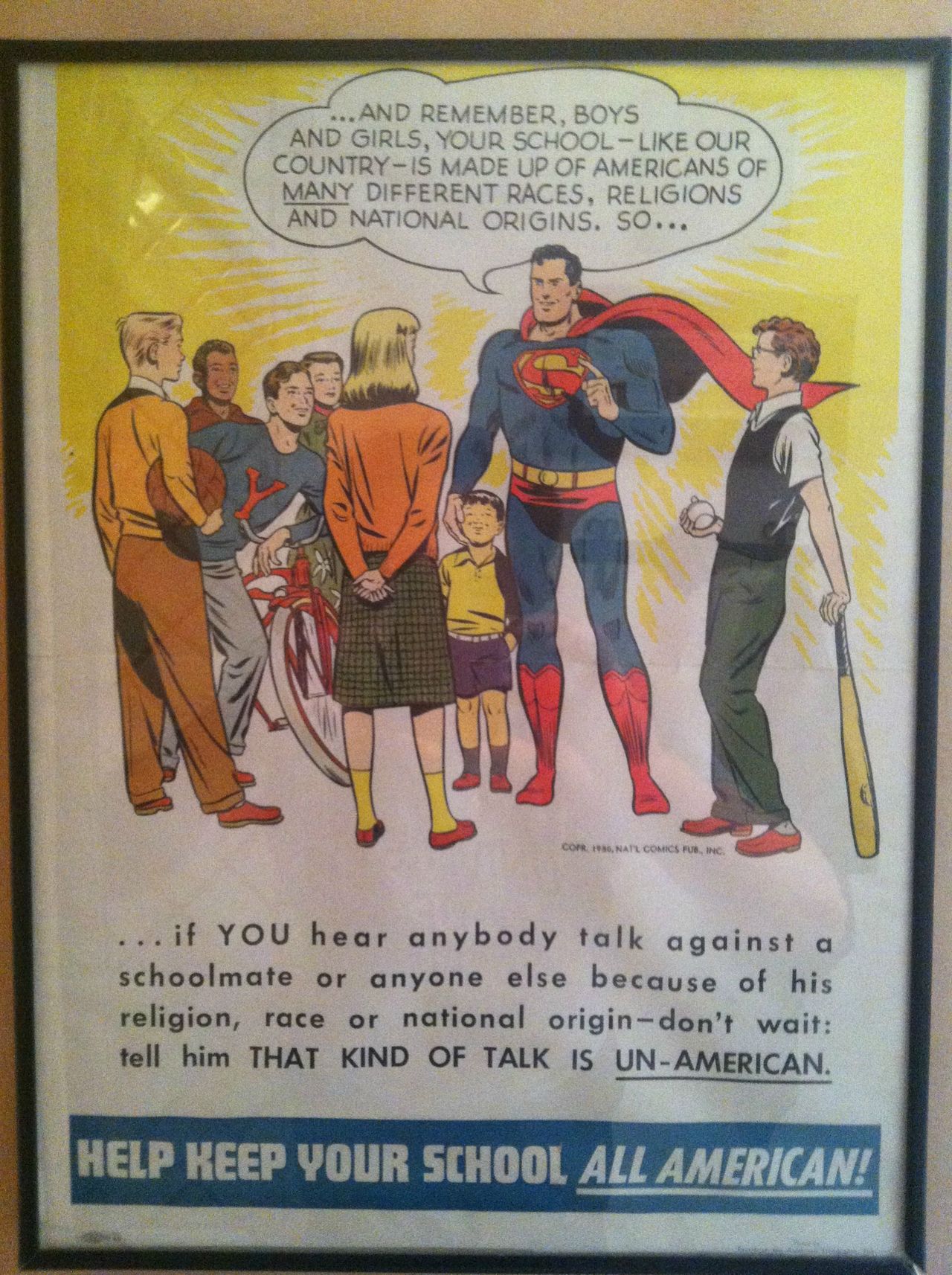 So because there were so many more people than they expected, the march kind of didn’t work out as planned. A lot of us never made it to the official route. First, I spent 2.5 hours waiting in line to get on the metro in Maryland.

If you can’t tell, there are three separate lines here, two on the left and one on the right, that stretch basically out of sight.

Once we finally got into the city (I was with my mom and my friend Betsey), we were supposed to get ourselves either to the rally point in front of the Capital or at least to Independence Ave, the planned route. But we never made it off the National Mall. Here is a badly drawn approximation of our path over the course of about 2.5 hours because we were moving at a barely shuffling pace most of the time. 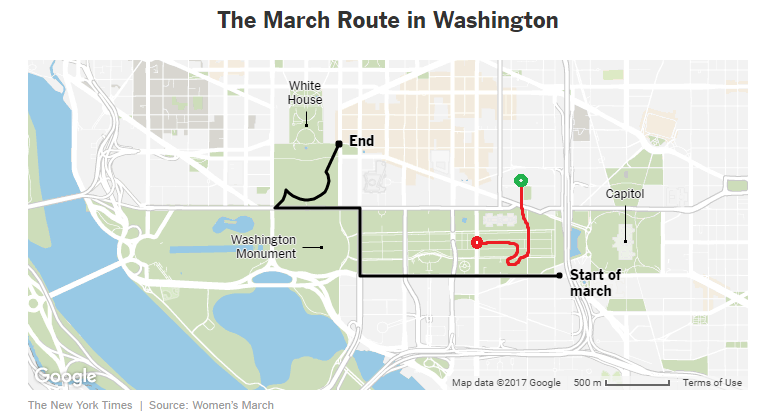 Internet and social media was basically non-functional during the entire time, I assume the cell networks were overwhelmed. I recorded some videos which I uploaded later to the Superficial Gallery Facebook page. But I took over 400 pictures with my real camera, so here are some of my favorites. I tried to get pics of all the best signs, and also the crowd in general. I had three other groups of friends in the city, but once we saw how insane the crowds were I gave up trying to get to any of them even though all of us were only a few blocks from each other the entire time. None of us could really move very much at all. 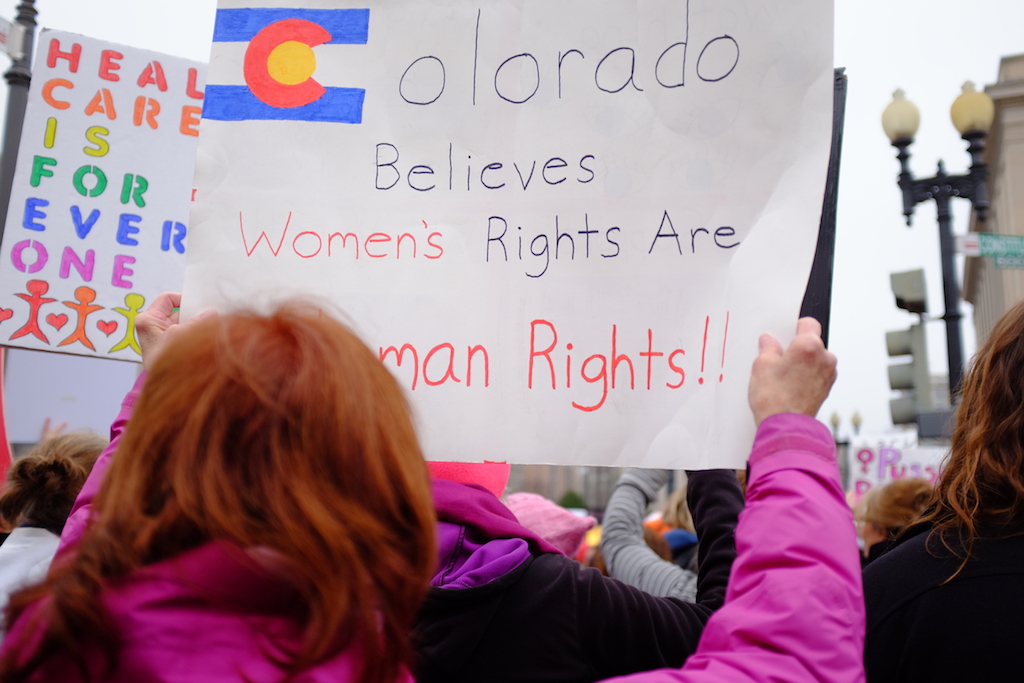 This is my mom! She came from Colorado. 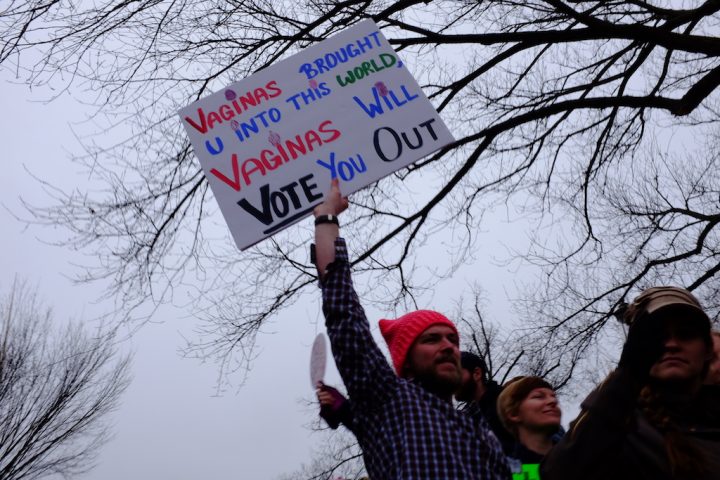 Vaginas brought you into this world, vaginas will vote you out. 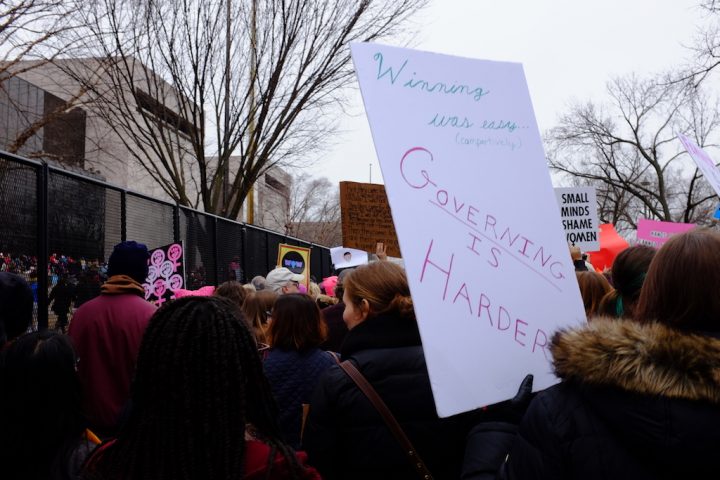 Winning was easy, governing is harder.

A woman’s place is in the resistance. (There were a lot of good Princess Leia references.) 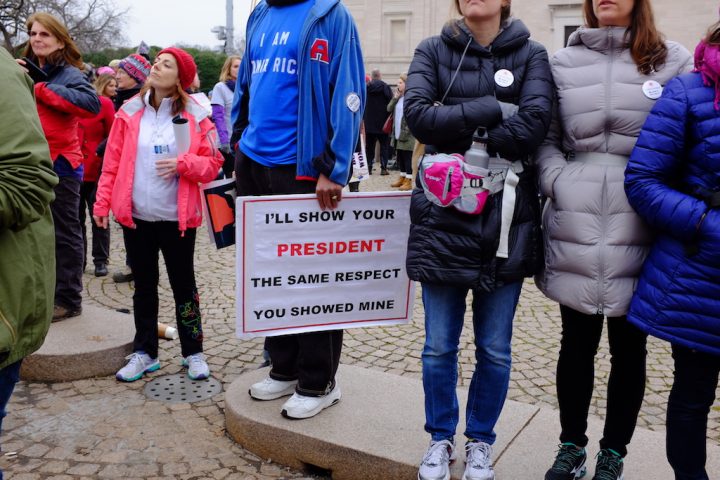 I’ll show your president the same respect you showed mine. 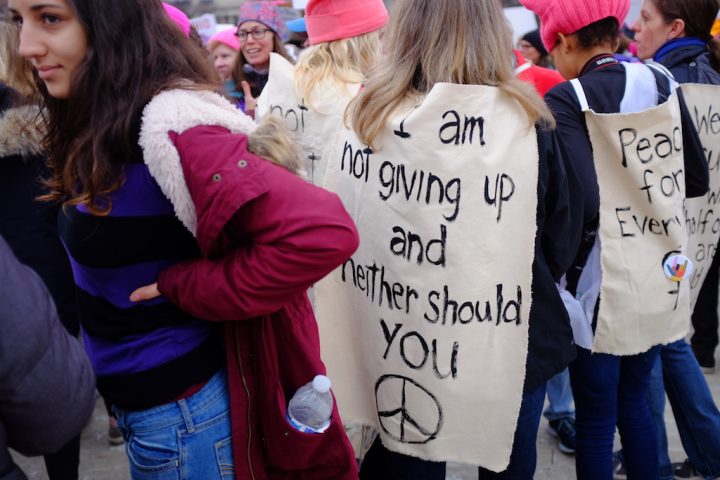 I am not giving up and neither should you (that’s an HRC quote from her concession speech).

The march was peaceful, positive, and fantastic. Any reports of violence or vandalism are entirely false. Fox News ran a story shortly after, showing the protesters who were destructive the day before, near the inauguration, and associated it falsely with this march. That being said, there is a lot of truth to the fact that we should all keep in mind that there have been an awful lot of peaceful protests in the country lately that didn’t end without police violence, and I think that’s because of who organized the march and who was mostly there. But regardless, know that these marches were done by peaceful people who are trying to affect positive change.

Did you attend a march? If so, how was yours? Tell us about it. Or tell us whatever else you want in the comments below.