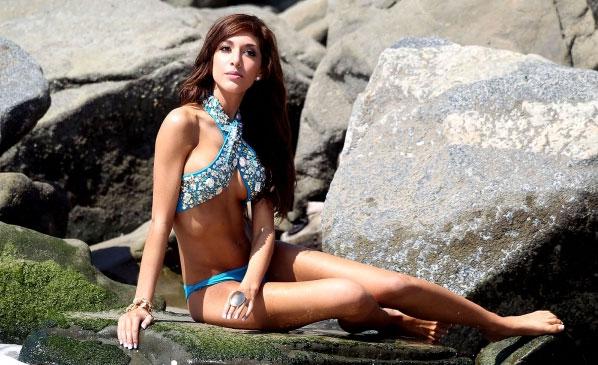 Farrah Abraham is the former “star” of MTV’s Teen Mom. She had her baby Sophia back in 2009, three months after her boyfriend (and baby’s daddy) died in a car accident. So what does this sweet young thing do after gaining fame and sympathy? Acts like a total skank of course. First she films an adult video with a known porn star in the Vivid studios… full production value and all. Then she denies the tape exists. Then she claims it was made for their private use only, that the two were dating at the time, and that he still calls her and it’s “awkward”. On the tail end (pun intended-watch the video) of that debacle she somehow gets Charlie Sheen’s number, texts him, mentions she’s auditioned for a movie he’s in, and proceeds to ask him out for coffee and a playdate with the kids. Luckily she’s his type (hot, young, dumb, and a newly minted pornstar) so after advising her that “coffee is for amateurs and grandmas” he agrees to meet. Score!  But before a meeting happens she leaks all their text messages to the media and Charlie goes on record calling her a “desperate guzzler of stagnant douche aqua”.  The man has a way with words.  And she has no options other than to get a boob job and take some pictures.  Ah, the great circle of Hollywood.  At least she didn’t have far to fall.