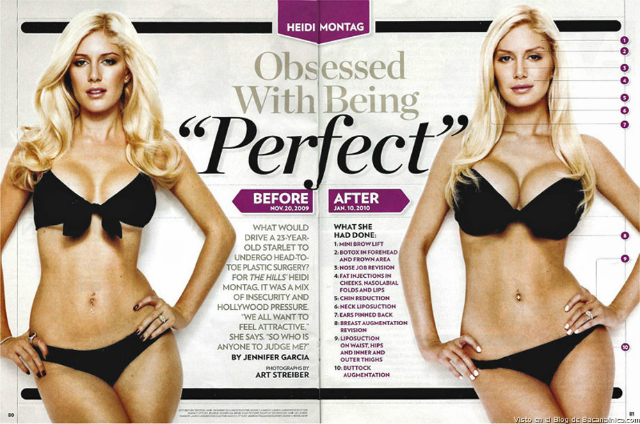 Does everyone know who Heidi Montag is? It’s not terribly important you have much context here I suppose, but for those keeping track she was in that awful MTV reality series The Hills (2006-2010). She’s famous-ish for her relationship with this douchey guy from the show (Spencer, ugh) and the subsequent plethora of plastic surgery afterwards.  She had like ten procedures done at once at the ripe old age of 25.  But the story today isn’t about her new implants, it’s about the new NEW ones.  You see, it seems her tiny frame wasn’t really cut out for F cups so she went back to C’s.  Apparently no one advised her that people with big boobs have back problems and find it hard to exercise.  Oh my.  So here she is in all her surgical glory (plus a before pic, and a before BEFORE pic for reference).  A truly superficial story indeed.

– Heidi Montag Photo Archive in The Mine