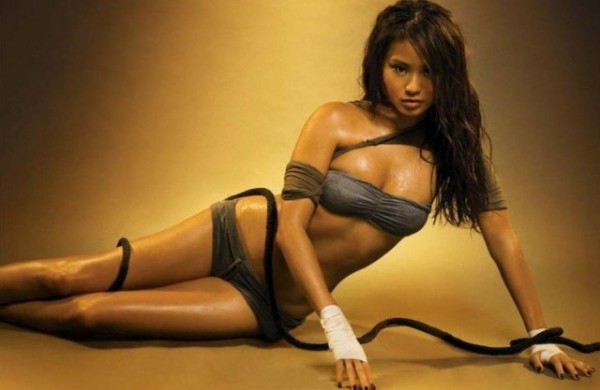 Jaime Chung is the hottest famous actress you’ve probably never heard of. That’s where we come in and provide a valuable public service! Allow me to fill you in. Ms Chung was born in San Francisco to Korean parents, studied economics at UC Riverside, and found herself working at a sports bar in San Diego when the casting crew for MTV’s Real World came through in 2004. She landed the gig, and unlike other cast members was able to use it as a launching pad for a successful acting career rather than a temporary cash infusion to buy booze and coke with. She appeared in Days of our Lives, CSI, and Veronica Mars, and later in movies like Sorority Row and Hangover: Part 2. She earned her nerd cred by appearing in Dragonball Evolution and lending her voice to X-Men: Destiny and the video game Command and Conquer: Red Alert 3. Just last week she had a series picked up by NBC, so it looks like we’ll be seeing a lot more of her in the years to come! She’s beautiful, talented, dangerous (trained in martial arts), and at the top of her game. What more could you ask for? An incredible bikini body? She’s got that, too. The proof is in the pics. Keep an eye out for her this fall on prime time, and enjoy the gallery in the meantime!