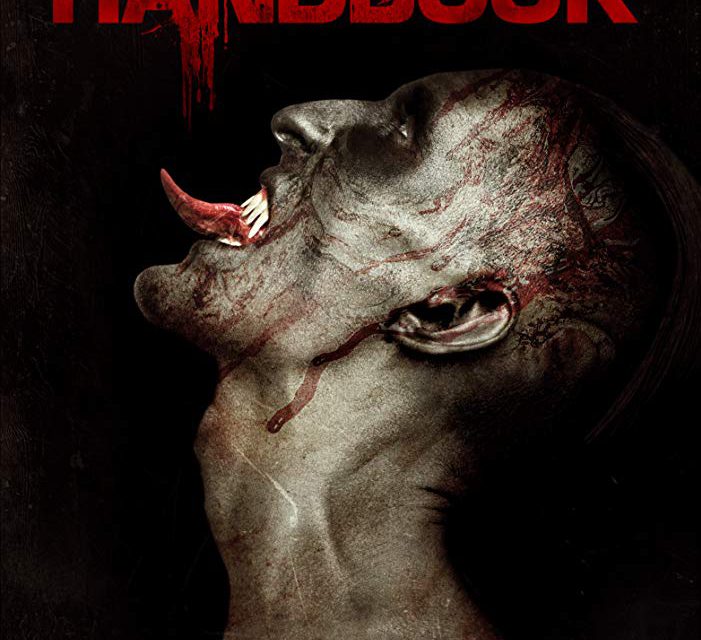 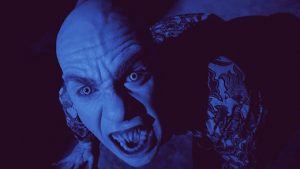 It is not often that we are given the opportunity to watch a truly surreal film. It has been my long-held belief that they simply scare many viewers off. The complex storylines, intensely vivid imagery, the dark and damaged characters, and their tendency to end with no traditional heroic resolution, can turn viewers away and over to simpler and safer films. For true fans of surrealist cinema, a new addition to the genre comes along so rarely that it’s almost like Christmas. My love of surrealist cinema began as a teenager with Jean-Pierre Jeunet’s Delicatessen. So, with my love for surrealist cinema, I was overjoyed when I was handed Bloodsucker’s Handbook. This is a film that truly grabs hold of the strange and surreal and runs wild with it. Written, produced, and directed by Mark Beal, Bloodsucker’s Handbook is completely bizarre from start to finish. There are vampires, go-go dancers, pteranodons, flamingos, animals wearing people clothes and driving cars, and even more strangeness throughout. All of this is brought together to create a fantastically strange and bizarre film.

Bloodsucker’s Handbook tells the story of “Father Noah Gregory”, played by Cory Ahre, and the vampire “Condu”, played with the most glorious scenery chewing by Joel Jeremy Herrera. “Noah” has been brought in by the U.S. Marshals to help in handling and communicating with “Condu”. There is no reason given for “Condu” being held by the federal government and there really wasn’t a need for one. If anything, a clear reason for holding him would have taken away from the mysterious and bizarre events to come. The meetings between “Noah” and “Condu” border on ridiculous and feel almost like “Noah” is visiting with the Mad Hatter. The best explanation of the strangeness occurring onscreen comes from Mark Beal, himself.

“Bloodsucker’s Handbook” is not so much a vampire horror as a surrealist film with a vampire character. My intention is for the surrealism to sneak in gradually — the story begins in a straight-forward fashion but eventually there is a point where the viewer has the realization: “Whoa, this is really strange!” The tagline, “Embrace the weird,” was drawn from the response of one viewer after seeing an early cut of the film.

That is, honestly, the most straightforward synopsis that can be provided for this film. It really is far too surreal to be considered a straight horror film. From the first few moments, just as we’re getting acquainted with Condu and Noah, we’re pulled into a story of madness that is exceptionally strange and it just so happens that this story has a vampire in it. And as Mr. Beal says, this is a “surrealist film with a vampire character.” With everything else happening in this film it could quite easily change its monster to a mummy or a werewolf and not lose a single ounce of its bizarre nature.

And now, as always, it is time for some technical insights into this singularly unique and odd film. Bloodsucker’s Handbook takes place in 1966. From the first moment to the last, the entire production looks and feels as if it belongs in that era. All of the costuming, whether it be the titular bloodsucker, “Condu” or one of the extras that happen to be on camera for a few seconds, all of the costumes look spot on. This is a film that takes the period accuracy even farther than most films have ever cared to do. Most low budget films would angle their shots to avoid seeing any vehicles that don’t belong in the era of the story. I was pleasantly surprised to see that Bloodsucker’s Handbook avoided this and used period correct vehicles for nearly every shot. This might seem like a small detail but I still appreciated it. There were straight on greenscreen shots but, for the most part, they simply used cars from the 60’s for all of their driving shots. The same is true for the cinematography and editing. It is not often that a film set in the past will lower the resolution and clarity to match the era of the story. Other than The House of the Devil, I can’t remember the last film I’d watched that has used this technique. This works quite well for most of the story, helping to bring the audience that much further into it, all of which feeds the surreal nature of the film. As much as I loved the use of the grainier filter, there were the occasional scenes that suffered from its use.  Throughout the film, especially towards the climax, were a couple of scenes that employed substantially darker lighting. When these lighting techniques were combined with the lower resolution, they created some very difficult to make out scenes. This was not something that was horrendous or so constant that it brought my overall opinion of the film down in any way. In fact, given that this is a low budget film, I understood how the issue was created. I was still very impressed with how much they were able to accomplish within their budget. A large part of the surreal nature of this film is the use of stop-motion animation for several of the characters and the animated scenes that provide visuals as “Condu” tells the story of his life. Granted, the animation is not a Disney quality production but it is well done for a low budget indie film. Finally, it was “Condu’s” makeup FX that I found to be my favorite bit of the technical work on this film. I’ve been a big fan of Ken Russell’s, Lair of the White Worm for the last 20 or so years. “Condu’s” makeup FX make him look as if he’d be perfectly at home with the predatory “Lady Sylvia Marsh”, hunting their victims together in shades of vampiric pallor. So, taken all together, there were definitely some flaws in this film but not so many as to warrant skipping it, should you have the opportunity to give it a watch.

This was, as I’ve said many times now, a very surreal experience. Stop-motion animated anthropomorphic animals, strange medical clinics hidden in a random apartment, shadowy government agents, and a priest with a drinking and smoking problem that may or may not be hallucinating affairs with several women. For lovers of surrealist cinema, this is a fun film that is worth the watch. Mark Beal is a talented director that has put together a solidly bizarre film. Sure, it has its share of faults, as nearly all low budget indie films do, but those serve to add to its bizarre and quirk-filled qualities. If for nothing else, check it out for the pteranodon and his go-go dancing girlfriend. I’m willing to bet you’ll never see that again.