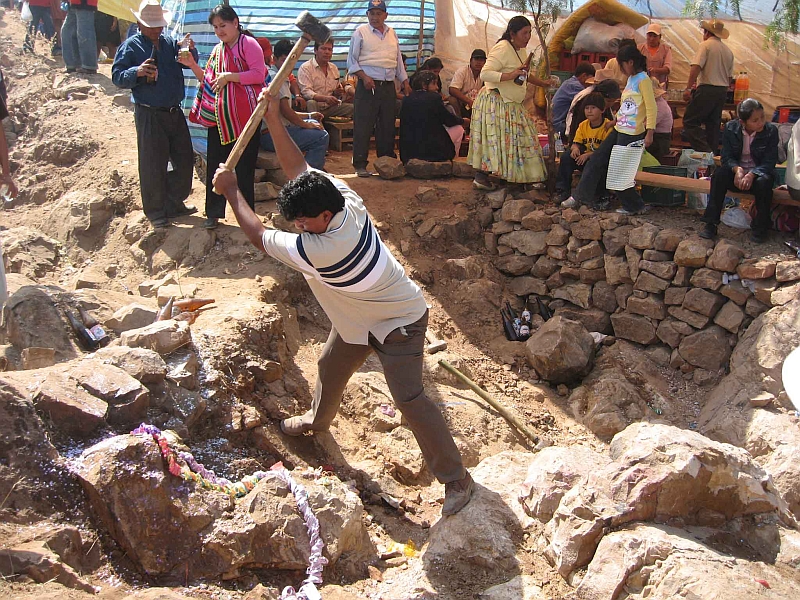 There are 12 Bolivians in the Olympics this go around and I think I know how they made the team.  Apparently, every year, Bolivian Catholics break rocks for wishes and the faster the rock splits the sooner the wish will come true.  Like the guy who had a bunch of rocks in his yard that were too big who tricked thousands of dummies to come break them for him.

“You can ask for a house, a car, all your wishes are fulfilled,” said believer Ricardo Tarqui. “I broke the rock with a second blow and in a third attempt. I have been able to buy a house and also a car.”

Right off the bat, it seems like they don’t do very well with the rock breaking unless the most common wish is to sell CDs while playing the pan flute at a flea market. Based on the picture, if they have been doing this for hundreds of years one would think all the rocks would be pretty small by now.  At least they are getting exercise.  When Americans want to make a wish they use eyelashes or blow out tiny candles or on dandelions or lie on the ground and wait for a star to do something.  Damn we’re lazy.

Maybe Bolivia can parlay their wish-mongering strength into Olympic gold if we petition to let that carnival bell ringing thing that you have to whack with a hammer in as an exhibition sport in 2020.