Borderland – One of 8 Films To Die For 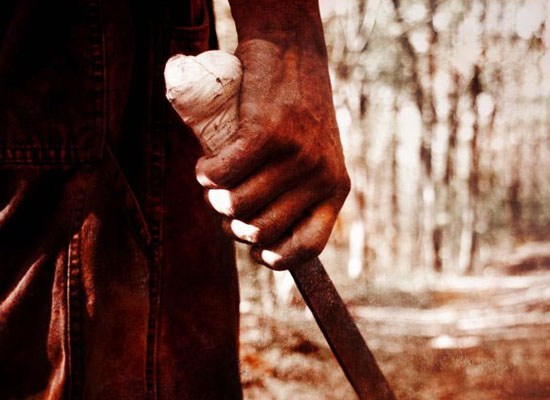 Warning!  Spoilers may be included….

This movie is based on a true story and in the first five minutes there was blood and gore – a true slasher flick 🙂  Lots of horrified screams and eyeballs being cut out and tossed into a jar of liquid…..  Ok, it’s got my attention and I am going to watch the movie now instead of type.

Now they’re showing the opening credits and just so you know – it’s all been subtitles so far.  I can only assume it’s in Spanish.  I speak no other languages but I do read English quite well.  After the opening credits we have English!  Back to the movie….

Three teenage boys, a trip to Mexico, boobie bar, sex, fair, one boy goes back to the room alone (we all know who is going to die first huh?), cemetery, sex…  Yep!  He’s been captured.  Escaped.  Captured.  You can’t even feel sorry for him.

Now the other two have separated and I have to admit I was wrong – one of the others is the first to get killed.  That’s what he gets for leaving his friends behind.

The other “Films to Die For” have all been scary, not so much slasher.  Maybe this one feels weird because it is based on a true story.  Anyhow, it won’t be a cult classic but if I had never seen it before I would still watch it.  I watch them all.  Only some I watch again and  again…  This won’t be one of them.

Favorite movie quote:  “Do it!  Do it Luis!  Or should I tell Papa you don’t have the balls?”

One of 8 Films To Die For http://www.horrorfestonline.com/

PS:  you have to watch the special features and deleted scenes.  The true story is gorier than what the movie shows.  This one is definitely different from all other movies to die for because it IS true.  This never should have been a Film To Die For.  This does not qualify as horror or slasher – it is true crime.  I don’t usually watch true crime.