But, mom, I’m about to buuuuuuy that jet… 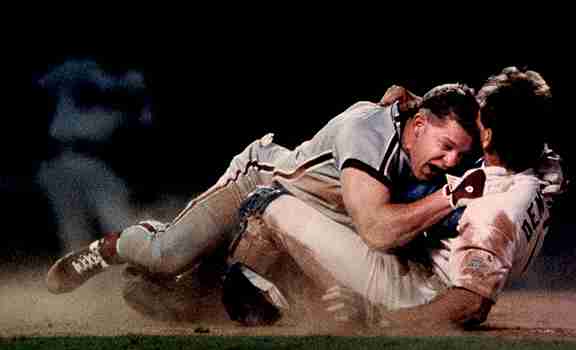 Lenny Dykstra is an awesome kind of multi-millionaire. Being that he was a former baseball player that used to spit tons of chewing tobacco, crash into anything and say the word “dude” way too much, people are interested in what he does. Which, sometimes comes to backfire.

Lenny was stranded in Cleveland. He wanted to charter a jet so he could get to a business meeting on the West Coast, and his credit cards were maxed out. He needed nearly $23,000 and asked his mother for it, Kevin says.

“He had no money,” says Lenny’s brother. “He is on the phone, crying to my mom, saying he has got to get home and he is in Cleveland, Ohio. He asked my mom to put up her credit card for 23 grand. That is just sick, dude.

I’m not entirely sure what to make of this ridiculously long article on ESPN.com about The Dude. Except to say that it is fascinating.

Clearly, ESPN set their sights on tearing Lenny down a bit. This is evidenced by one photo caption reading, “Dykstra was very good at baseball, but there are questions about his businesses.” But, one thing that is clear, Lenny is certainly quite delusional.

When race car driver Danica Patrick appears on a TV commercial, he pipes up, “I made her, man. Put her on the cover [of The Players Club] and made her.”

The Players Club being a magazine, that according to this article, The Dude made just for athletes, that he sinks 500k into every month, doesn’t sell advertising for, doesn’t have a business model for, loves, recommends the hell out of AIG in, and refers to as a book.

Apparently Lenny has been smacked with 18 lawsuits in the past 6 months, which seems like a pretty impressive number.

The lawsuits suggest that one of two things is going on here: Either Lenny hates to pay his bills, or he’s a financial train wreck.

Apparently, The Dude’s go to move when he owes someone a large chunk of cash he can’t pay is to offer them some flights on private jets and what not.

“He was always spinning something really obscure,” Jurewicz says. “And you know how Lenny talks. ‘Hey, bro, got this deal, man. I got to get you into a bird, man.’ And you’re like, ‘Listen, chief, I want a check.’

He’s going to pay us as soon as it comes in. And then he started telling me he’d like to know if we could work a deal where we could fly his [private] plane and take that off the printing bill. I’m not the kind of guy that flies all over the world in a private jet. We’re basically a family-owned business. We’re not jet set.”

There’s a mention in the article where Lenny asks his pilot to put 7k in refueling costs onto the pilot’s credit cards in order to come pick Lenny up. Lenny I guess was still maxed out and mommy wasn’t home, so why not have the pilot do it, dude. When the pilot said he didn’t have the money for that, Lenny fired him.

Oh, then the article mentions this was at least the SECOND pilot Lenny had pulled this with.

There’s also a passage where Lenny might have asked his driver to rough up a pilot and possibly drop a luxury car off with a Russian Mafia chop shop and get that cash. I mention these more in passing, because, well, they tend to move more from just the absurd into the illegal.

Reading a passage about how Lenny picks stocks and only mentions his winning picks sounds a lot like how he just avoids paying anybody in general.

“It is all nonsense,” says Warner, options editor for the financial Web site Minyanville.com. “He’ll buy a 10 lot of, say, IBM. And if it makes a dollar, he’ll sell it. If it loses, he’ll buy more and he’ll keep buying more and more. So he’ll never actually realize a loss. And he buys options that expire in as few as six months and sometimes as long as a year. He’ll book his wins and he’ll just let the losses run. So what happens is, he wins all his picks, but the losers may eat up 100 wins.”

So, pretty much Lenny just goes through life promoting the success and hiding the failures, according to this article. Of course he needs to show up to a business meeting with a family publishing company in a private jet to impress people who don’t give a fuck about being impressed. He needs that style, it would seem. Of course, he doesn’t tell them how he begged his pilot to front the cash to make this impression.

Two weeks after he fired his brother, Lenny Dykstra fired his mother’s brother.

Yeah, that about sums it up.

I can’t recommend this article enough, it is the best thing I’ve read on ESPN.com in quite sometime.