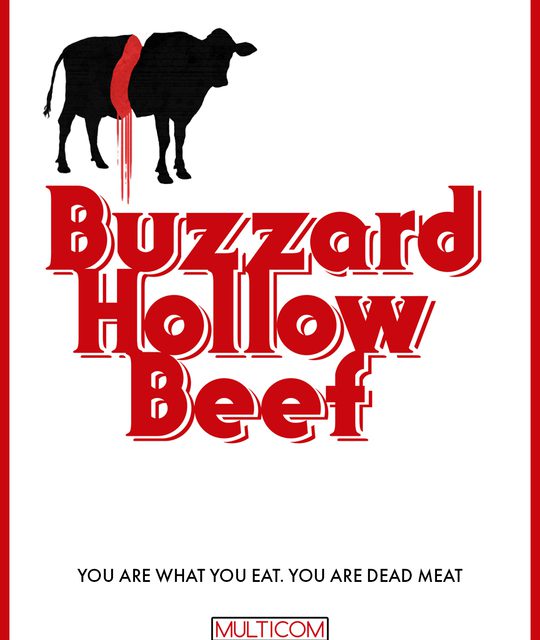 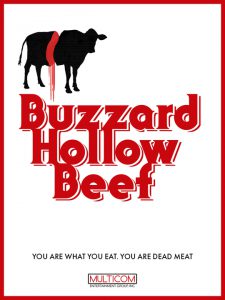 Films depicting cannibalism are quite often among the most notorious of horror films. Whether it’s a film that audiences find too realistic and hard to sit through, something like Cannibal Holocaust (1980), or a story of backwoods hicks and their cannibal-fueled incest, something like Wrong Turn (2003), cannibalism films have a special place in the horror genre. Buzzard Hollow Beef feels like it’s going to be one of those films before taking a hard right and becoming something completely different. It is absolutely all the better for it.

The film starts out simply enough and brings together a group we’ve seen many times before, the perfect 50/50 gender split of friends and family. What this film does bring into the mix that we rarely see, and that is used to perfect effect (more on this later), is the addition of the main character’s baby. He’s not seen very often but you certainly won’t forget when he is. Thrown into this close group are small smatterings of local folks that are played for their creepiness and malice (most especially by Will Frazier who plays his role with crazy-eyed delight). This all presents as a fairly by the numbers set up for a good film but a film that’s not groundbreaking and is certainly nothing that we haven’t seen before.

But here’s the thing, that’s all assuming that you’re seeing what you think you’re seeing. Now, I’m not trying to brag when I say that I watch a lot of horror films, it kind of comes with the job of writing reviews for horror movies, but I watch a lot of horror movies and I’m rarely surprised by the “big twist”. That being said, I did not see the turn this film was taking until after it happened. So many of the scenes have a light hallucinatory feel, combined with an underlying mania and paranoia, that you find yourself sucked into it along with the characters. From Jordan’s fears and desperation from becoming a newly single mom to her brother Joel‘s insecurities and fear of being alone, the characters defining aspects become increasingly manic, paranoid, and fed by hallucinations. It all builds to a final act twist and ending that I am genuinely happy I didn’t see coming. It truly brought everything together perfectly for me and I absolutely loved it!

As always, it’s time to take a look at some of the technical aspects of the film and how they made me crazy or giddy. One thing that Buzzard Hollow Beef does really well is integrating some of the finer aspects of the hallucinatory madness that our characters are experiencing. One of the best “in your face” hallucination moments come from Joel, played by Gabriel Caste, when he does his best Poltergeist impression with a straight razor. It is bloody, the makeup is perfect, and Joel’s fear and confusion are palpable. As previously mentioned, Jordan’s baby Zac doesn’t spend a lot of time on camera but his biggest moment definitely sticks with you. Clearly struggling with her new status as a single mother, Jordan sees herself going through a horrifying nightmare of pregnancy and little Zac being given entirely the wrong kind of nibbles. The makeup and SFX in these scenes looked amazing and did an excellent job of feeding into the overall tension and manic feeling of this film.

So, boiled down, this is an excellent film. It starts out by bringing you into a situation that you’ll feel comfortable with, you’ve seen before, and you know the menu. Then, once you get settled in, Buzzard Hollow Beef takes all of those tropes you’re comfortable with and tosses them out the window. It was an excellent ride and I loved every trippy minute of it. Buzzard Hollow Beef from A Man & A Woman Prods, written by Joshua Johnson and Tara C. Hall, with Johnson handling directing duties as well, and starring Emily Letts, Doug Perkins, Nadia Kamil, Gabe Caste, Bruce Jennings, and Janet Chiarabaglio is currently available on Amazon Prime. Give this film a watch. You will be happy you did!