I read the news today, oh boy. The Supreme Court ruled that California has too many prisoners and stuffing all those criminals in their hot hot jails is cruel and unusual punishment.  As a result, they are supposed to cut 30,000 people out of the prison system within two years.  They say they don’t have to “only” let criminals loose but I don’t see how they can avoid it.  It’s not like they can just make a bunch of crimes legal or execute people for minor offenses like Texas does.

So now it’s a good bet that the whole state will be filled with murderers and meth heads running free.  They’ll charge up and down the streets with their dicks out and shooting guns at people, hollering and getting welfare.  If you live in California you will probably die.  And if you don’t you will be soon be conquered by California’s criminal horde.  Unless people go with my prison reform idea!  I have been working on it for about three years and I believe I have the kinks worked out and it is ready for implementation. 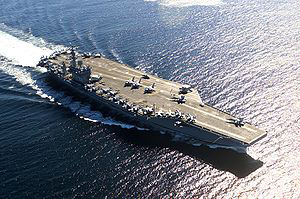 Welcome to the USS jail, shitheads!

Yep – that’s right.  I am saying that we make a couple of old aircraft carriers giant floating jails.  I have a long list of reasons why, some of which I will now enumerate while you all think about sending me money to make this American Dream a reality.

The ending of the USS Shawshank Redemption would have been very different.

So, unless the prisoners take over the ship and become their own country or one lies on the “can you drive an aircraft carrier” question and drives the jail to South America, the odds are that The Golden State can sweep their criminal problem right under the giant blue rug of the ocean.  And, because I am a fair man, they would all get to drive to the jail in one of those cool Miami Vice boats.  Cause really, it is only fair considering that they are going to spend the rest of their lives on an aircraft carrier that smells like pee.