Carrie – Why didn’t I realize this before? 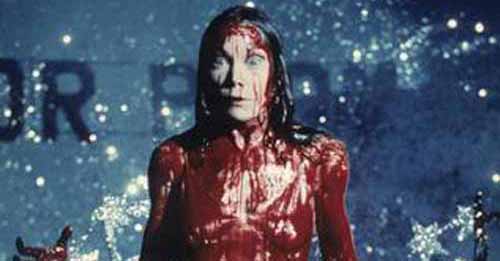 Does this dress make me look pissed off and telekinetic?

So this past weekend I was watching Carrie for the seventeenth time and something occurred to me that I had not realized the first sixteen times I watched it.  Or when I read the book as a kid.  If you don’t know the story, then you are uneducated in the ways of horror moviedom.  You can watch the original trailer below and I can give you the gist of it.  Essentially, since it is Stephen King, you take a regular situation (unpopular high school girl) and then make it fucked up (she has telekinesis).

Now, for the thing I never figured out before.  See, the opening scene is Carrie in the gym shower with the rest of her class and she gets her first period.  Of course, since her mom is a whacked out religious nut, Carrie was never informed of this impending event (and apparently schools back then were not big on sex ed) so she freaks out and thinks she is bleeding to death.  The rest of the girls dangle tampons in front of her and then move on to throwing them at her while chanting: “Plug it up, plug it up.”  So that’s shitty high school stuff.  And you might think it is just setting the scene for how Carrie is picked on.  BUT!  She didn’t KNOW that she was telekinetic until then.  Or maybe she even wasn’t.  It was puberty that did it!  So the next time you see some awkward, gangly and pimply kid crying nobody gets him/her, you better think twice before you approach them.  They might have powers!

Finally – some additional reasons to watch the movie.