Charlotte McKinney does Stand Up and I hate David Spade 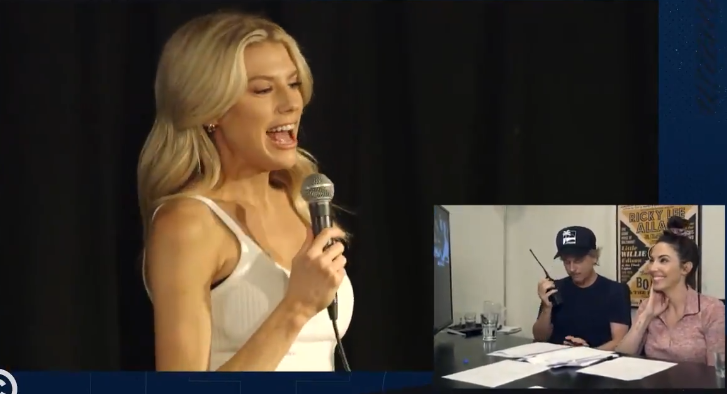 I know I wrote about Charlotte McKinney the other day but I can’t help it if she is making moves and starting grooves.  The only issue with this is that it involves David Spade and if that shriveled little bastard touched her when she was on Joe Dirt 2 I will find out somehow and be really mad without being able to do anything about it.  So I will be Joker.

And speaking of Jokes, Charlotte was on Spade’s Comedy Central show Lights Out doing a segment called Secret Stand Up.  The premise is actually pretty good.  They give the subject an ear piece, send them out on stage at some Chuckle Hut and Cyrano De Bergerac them some jokes for three minutes.  Seems like it would be easy peasy for the person getting the jokes fed to them but my gosh I can imagine it being the exact opposite.

Firstly, the comics have SO much control over the person on stage.  I cannot imagine it would be good TV to humiliate someone but damn they could if they wanted to, especially if it is someone who blindly trusts them.

Spade:  “No, go ahead, make fun of that handicapped person!”

Now the real reason I am writing about this is not to hype Spade (he is slimy AF) but I know that Charlotte DOES want to do comedy, and I was excited to see what she did with the chance.  You can always tell if someone is funny or not, even if they are telling someone else’s jokes.  You can’t teach timing.  And as weird examples: George W. Bush has it and does Obama.  And this bit is an exercise in timing.

So you tell me, does Charlotte have it or nah?  And don’t come at me telling me that she gagged some of the wording.  She was nervous and that is understandable, and I am not just saying that because it’s her. Spot her one ad lib and see if you think she added to the joke.  I do and it was because of the timing.  Anyway let me know what you think and if you also think David Spade is slimy!