Christmas cards. PFFT! I’m fairly sure I’m going to break a few hearts with this article, but come on people!

Christmas cards (and greeting cards in general) are simply a lazy, “Big Mac and Fries” way to express sentiment to someone without having to actually interact with them.

The douche-nozzle responsible for this travesty was Sir Henry Cole. In London in 1843, he came up with the concept of sending greeting cards at Christmas time. The first Christmas card looked like this (after the jump of course): 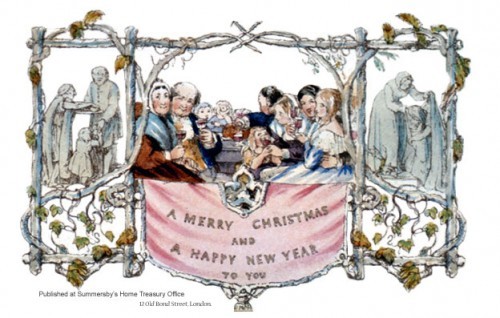 They haven't improved in over 160 years!

He made about 205 British Pounds off two batches, which today would translate to almost 12,000 British Pounds today! The guy didn’t care about his great aunt Edwina! He was in it for the money and the world has fallen victim to this “tradition”!

I’m not a fan of greeting cards in the first place. I’d rather receive a short personal note from someone than a sentiment mass-produced onto a piece of heavy paper with a stock photo printed on the front. The expectation level that you HAVE to send them out at all is so freaking high that people are OFFENDED or HURT if they don’t receive one.

BALONEY. I emailed you yesterday.

However, if you do feel the need to send out Christmas cards, at least have the decency to personalize them and write something meaningful inside, other than “Merry Christmas from Tom, Joann, Bobby, Billy, Brenda and Booger-butts Henderson!”  Otherwise, I’m probably going to use your card as fat-lighter.