Coconut  Crab (Birgus  latro) is the largest terrestrial arthropod in the world. It is  known for its ability to crack coconuts with its strong pincers in  order to eat the contents.  It is also less known for it’s ability to scare the living shit out of me just by knowing it exists.

It  is sometimes called the robber crab because some coconut  crabs are rumored to steal shiny items such as pots and silverware  from houses and tents.  Though who is spreading rumors about crabs is something I could not figure out in the course of my reporting.  My best guess is that since nobody dares to say anything to the Coconut Crab’s face, rumors and terrified screams are the best anyone is going to get. 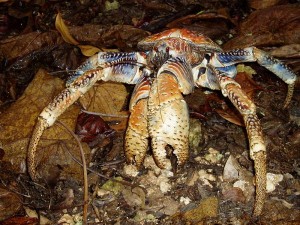 Doesn't look too big, does it?

The second  photo gives you a good idea of how large these crabs are – a coconut  crab is seeking food from a black trashcan by a trailer at Sunshine Key. 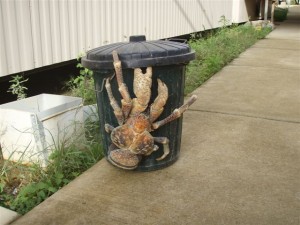 Holy Fucking Shit. Someone get an elephant that can shoot a gun.

The coconut crab is a large edible land crab related to the hermit crab, and are  found in the tropical Indian, Pacific Oceans and Florida Keys . They eat coconuts for a living! How would you like to be on an island and come across a crab that is more than 3 feet from head to tail and weighs up to 40 pounds, with a pair of large pincers strong enough to open coconuts! They can climb trees too, but they only eat coconuts that have already fallen to the ground. Coconut crab meat has been considered a local delicacy.

Editors note – I usually don’t add things to email forwards, but I think the person who sent this in was pretty nonchalant about the whole thing.  These things deserve a lot more attention than they are getting.  What if they figure out how to drive cars or get jobs?  Is there any kind of task force investigating this?  Don’t say you have not been warned.