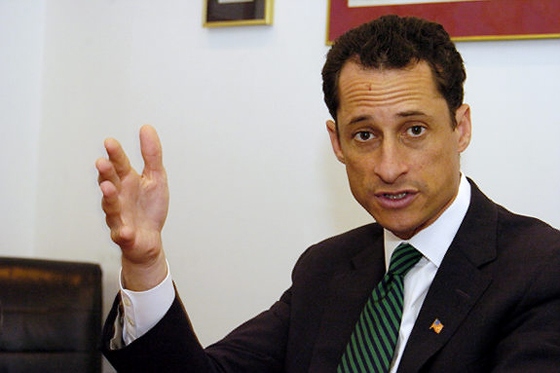 So not that it was very difficult to call, but I totally called the Anthony Weider meant to send a DM thing the day after the scandal broke.  This is exactly what I said:

I will bet you $100.00 that he meant to send that as a DM.  And if it turns out he was using Tweetdeck, I will up my bet to a zillion dollars.

Why?  Because Tweetdeck is built to make you fuck up when trying to send tweets.  I don’t even have anyone to have textual relations with and I still fuck it all up constantly.  Here is Tweetdeck

I am outlined in Red. I am being a weird stalker to a dude via Direct Message.

So you can see that Julie from Momspective wants to see my junk.  Did I make a tweet asking of people wanted to see my junk so my screenshot would look cooler?  Yes I did.  It’s for my art.  Jerks  Anyway – now on to the problem that Wiener had.  Confusing Mentions with Direct Messages.

Step One – find someone you want to tweet to.  I’m choosing Sarah Silverman for my experiment.  She tweets jokes and that’s about it.  Sometimes she does crazy videos and pictures but most of the time it’s those one line jokes that everyone tweets in the hope that people will retweet it.

Oh, and just in case you think all I do is tweet to famous people – I have a very thin definition of “Celebs”.  I have the red-headed racist from The Amazing Race on there, as well as Amanda Carpenter, Right Wing Shill.  I also have Keith Olbermann so my Tweetdeck does not tip over.

Let’s zoom in on Sarah’s thing (heh) after the jump and see how Mr. Weiner made his mistake.  Once you see it you will be all like – damn!  He could sue Tweetdeck for sure!

So in Tweetdeck when you mouse over someone’s pic those little gray boxes show up.  See the envelope?  That’s for DM.

See the arrow? That’s for a reply.  They are RIGHT NEXT to each other.  All Poor Wiener did was hit the wrong button.  And after you hit the button, it is just as hard to tell!

The little @ is when you send a mention.

Please note the URL in the “link” HA!

Anyway – It’s Tweetdeck’s fault.  Wiener said he hit the wrong button and panicked and took the pic down right away but it was too late!   Ruined!  Just like my plans with Patton Oswalt.  Stupid Tweetdeck.