I had a big get together this weekend.   Lots of people I hadn’t seen in a long time showed up.  That was cool.  The downside was that some of these people also brought people I had never met before.  That was not so cool.  While most of these new folk were pretty decent people, one guy in particular was a complete douche bag.  As the night went on and people got drunker, this dude got douche baggier.  He was getting on everyone’s nerves so badly that a couple people even left because of him.  At the end of the night, after he had passed out, it was time for revenge.  We tested his ability to wake up from his drunken slumber by gently poking him with things.  He didn’t move.  Then we started making lots of noise around him.  He still didn’t stir.   Someone suggested that we start drawing on him with a Sharpie.  I was about to go along with that idea when I saw my electric hair clippers sitting in the corner.  Seeing as how I hate those god awful fauxhawks in the first place, I figured it was time to relieve this guy of his.  Amazingly, I was able to shear him almost completely bald without him waking up.  I was going to get all his hair, but I got a better idea in the middle of his impromptu haircut.  In the morning, when the dude got up and saw himself in the mirror  of the bathroom, he lost his shit.  He thought we had shaved him bald, but when someone pointed out that we hadn’t, he wanted to know what we left.  So, we snapped a pic to show him.  And to show you.  Check it out after the jump. 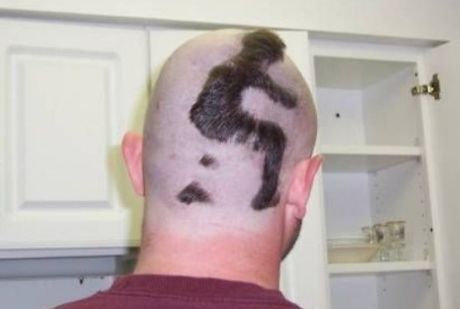 Don't get pass out drunk around people you do not know.

Filed under: Earning Every Penny