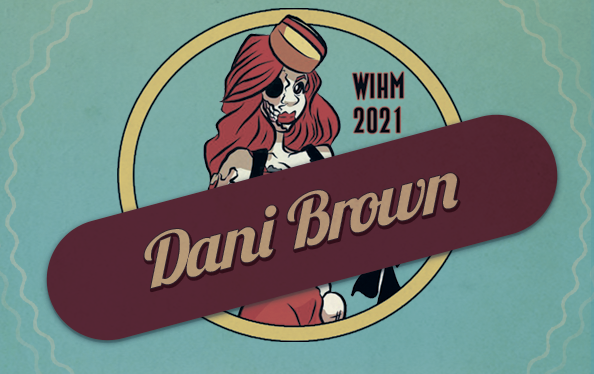 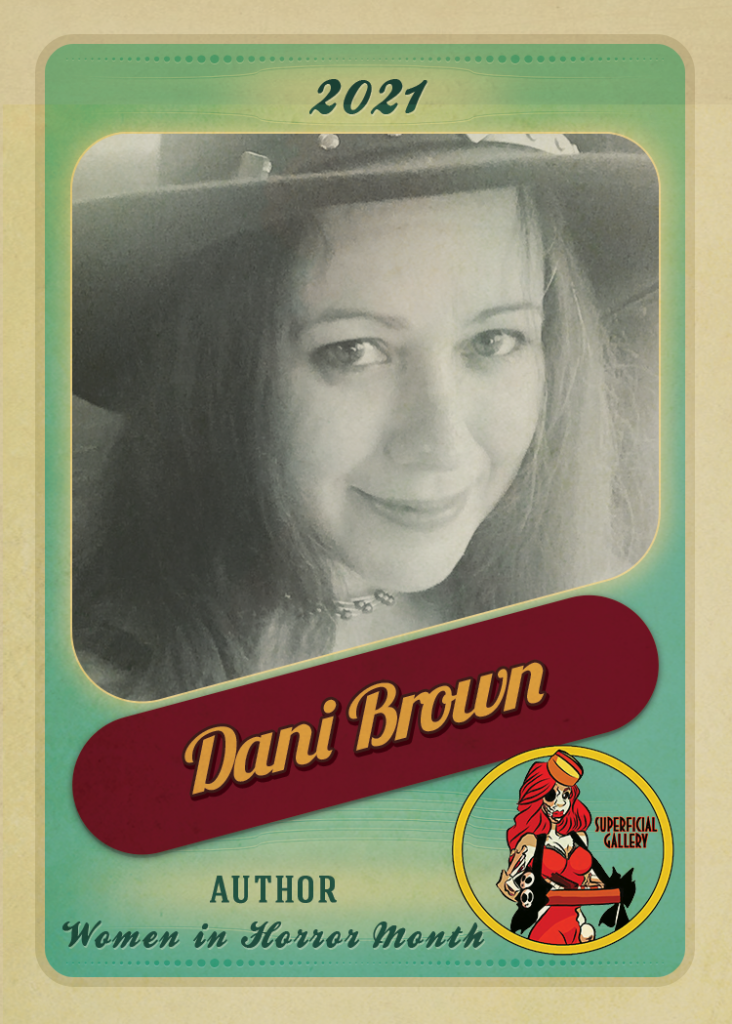 Dani Brown is a rookie to the Gallery WIHM event. She is an Author, Artist.

I hate being someone who shines a light of positivity in other people’s darkness, it seems like rubbing it in, but the lockdowns as a result of the deadly pandemic have been kind towards me. At the start of the first lockdown I did have some awful people living next door to me but once they took off on the night I was able to really settle down and focus on writing and art without outside distractions or problems (people causing drama).

I’ve been busy writing and drawing. I’ve also been trying to get back some skills I had in terms of circuit bending and sound art. It took awhile for my art skills to return so as long as I work at it when I get a chance, it will come back.

I’m also a single mother so entertaining my son during lockdowns and ensuring he does his schoolwork.

I haven’t been able to watch any new films and horror metal isn’t my thing. I don’t know if any books I read in 2020 were published in that year. I didn’t think to check. 2020 and the lockdowns were a way for me to catch up on things I missed and I still have a lot of catching up to do.

I’m not really sure. It would be nice to physically see people again. If the U.K. opens up I’m not sure if I’ll be able to or not. A lot of the money I earn now is going on putting my life where I want it in preparation of moving so I don’t end up isolated again. All the people with the drama left me locked in my house long before the first lockdown. I’m definitely looking forward to moving and getting away from the drama in my life. Then I’ll be able to spend more time within the horror community.

Sheer stubbornness. At one point I was waking up at 5 in the morning so I can write (I had to give up everything else to focus on one thing in hopes I’d be able to do other things in the future). People never trusted me to know what I was doing and what I wanted out of life. It created needless stress and drama. Waking up that early gave me an hour and a half each morning before I would have to get my child up for school and start the day which would always bring more people and their drama. When I really feel like I can’t go on I take a break, maybe watch some tv and then think back to that time when I worked so hard to be left alone so I could focus on my thing. I don’t want to go back through that.

Right now I am hoping a visual art block lifts so I can create a book cover for a book I’m self publishing. It is titled “Karen and the Crabs from Outer Space”. It has been edited. I do need to tweak some of the formatting (I did a practice self published book), so other than the cover it is ready to go.

While I wait for that to lift I’m working on two novels. The first one I half wrote in August (once the neighbours lift I wrote two and a half novellas). It is titled “We Gave the World Synthpop Dreams” and it has been a long time coming. Following the breakdown of a relationship I wrote “56 Seconds” and “Becoming” with notes for other books and stories. Unfortunately once I finished “Becoming” and needed a little writing break the creeps decided I had been single for long enough and I had a bunch of drama trying to get rid of them. It created a bunch of stress which makes it near impossible to create. “We Gave the World Synthpop Dreams” is one of the stories I had notes for it. It is set in an underworld called the Neon Dream. The queen of this underworld stopped collecting the souls of the dead because she wanted to party with the A-list popstars of the time. It looks at the consequences for the underworld and connecting worlds as well as the consequences for the now very old popstars.

The other book I’m writing is titled “The Memories of the Excess of Yesteryear, Dusted with Cocaine”. This is also set in the Neon Dream and explains how it finally crumbles.

While writing these two I am making notes for other stories and appreciating the current lockdown in the U.K. which means creeps and anyone who doesn’t trust me to know what I’m doing with my life are more likely to leave me alone. Once the visual art block lifts I will do that book cover I already mentioned and get back to drawing bizarre creations mainly based on medieval art.