Things You Should Know – Danny Casolaro 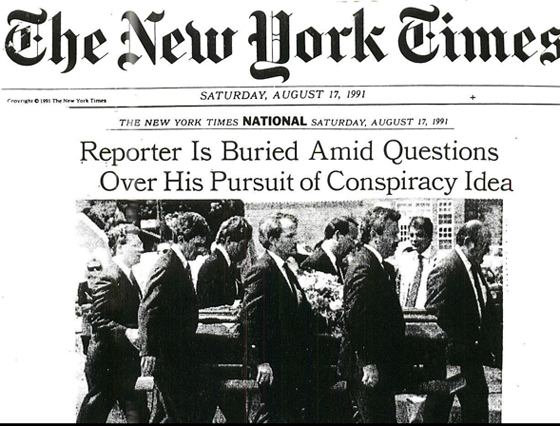 Danny Casolaro was a free-lance (read: unemployed) writer who was working on the story of a lifetime.  He started out investigating possible government involvement in the theft of a software program called “Promis” and ended up finding some sort of connection to pretty much all of the big scandals of the 1980’s (BCCI, Iran Contra, the October Surprise, you name it!) that he was going to call “The Octopus”.

Now, it is possible that telling a bunch of people this might not have been such a great idea, because the day after Mr. Casolaro went to meet someone who was going to give him the final pieces to the puzzle in Martinsburg, West Virginia he was found dead in his hotel room.  It was ruled a suicide but the following things were suspicious about it.

Now, I know it is easy to see a conspiracy everywhere you look, but this is not one of those far fetched things like Area 51 or women being as smart as men.  This is about a dude who had 12 cuts on his wrist, one deep enough to cut a tendon who was ruled a suicide.  Don’t believe me?  Well, you are probably in on it.  But since I’m generally untrustworthy, I have some proof after the jump.  Shit was on the news.  And on Unsolved Mysteries.  So suck on that.

Filed under: conspiracy theories, murder, mysteries, things you should know