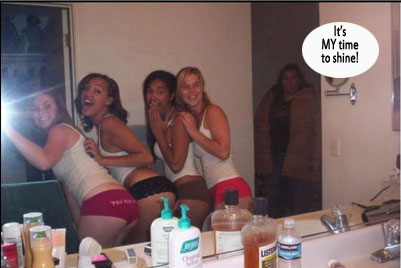 Since the only way people can get dates is on TV shows now, Fox has decided to make a show that will be ‘inclusive’, cause they get the fact that not everyone is a size two.  Look at this!

The series, titled “More to Love,” is billed as the first “dating show for the rest of us,” throwing open its doors to overweight contestants.

So now they figure that fat people are going to watch a TV show about other fat people dating so they can understand that fat people can get dates?  How is that going to convince anyone of anything?  You see fat people walking around all the time with dates.  And husbands.  And wives.  And sometimes one is fat and the other one is skinny (I like those couples, cause their shadows look like a number 10).

What Fox is missing is that if we want to watch fat people, all we have to do is go outside.  That’s not what TV is for.  TV is for NOT average.  Why don’t they just skip the figging tryouts on American Idol if they want average? Just put every asshole who wants in on the show.  Run it five nights a week, and let people call in and start narrowing it down from there?  Actually, that’s a pretty good idea.

But anyway – I can fix the Fox fatty farce, but they will need to do a tie in.  If you want to see how, you can after the jump!

Is my penis showing?

OK – So if they want to make the game really good, they should do this:

OK – I don’t know why I numbered those things above, but here is the point.  When the guy finally picks the girl, then EVERYONE on the show, even the ones that got kicked off, have to go on The Biggest Loser.

And when they have gone through the WHOLE season of the Biggest Loser, at the finale, the guy can pick again.  BUT!  If the guy figured he could just stay all fat and lazy and get himself a skinny chick, then he could end up being refused.